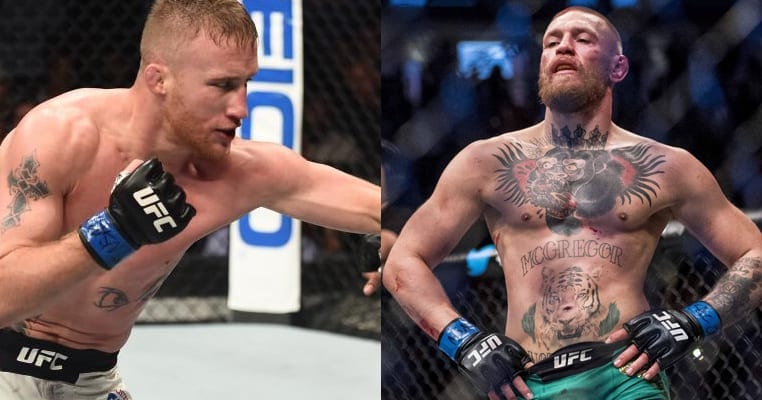 Conor McGregor’s next fight, surprisingly, will not take place at 155 pounds. Instead, McGregor will take on Donald “Cowboy” Cerrone at welterweight in the main event of UFC 246 on pay-per-view (PPV) from the T-Mobile Arena in Las Vegas, Nevada on January 18.

This is good news to top-ranked 155-pound competitor Justin Gaethje, who says the welterweight aspect of the bout now takes McGregor out of the lightweight title picture, as he explained during an interview on “The Luke Thomas Show.” (H/T BJPenn.com)

“I mean, it’s a freak show man. I don’t know what to make of it,” Gaethje said. “For me, I think it’s good, it takes [McGregor] out of the picture. It kind of clears the path to what needs to happen.

“Fighting at 170… I don’t know how in his mind he can say ‘I’ll fight in 170 and then fight for the world title next.’ I’d like to think it is because he doesn’t want to fight me, but I don’t think I’m that scary. I don’t understand it.”

If McGregor wants another shot at the lightweight title, Gaethje says the Irishman needs to beat someone at 155 pounds.

“If he wants to fight for a world title, he has to get another win in the lightweight division,” Gaethje said.

“I’m sure he knows that he’s gonna put pressure on Dana [White] and the UFC to give him a title fight after… If he beats Cowboy at 170. Or maybe he’ll fight someone else at 170, I’m not sure what he’s doing.”

What do you think about Gaethje saying McGregor’s welterweight fight takes him out of the lightweight title picture?