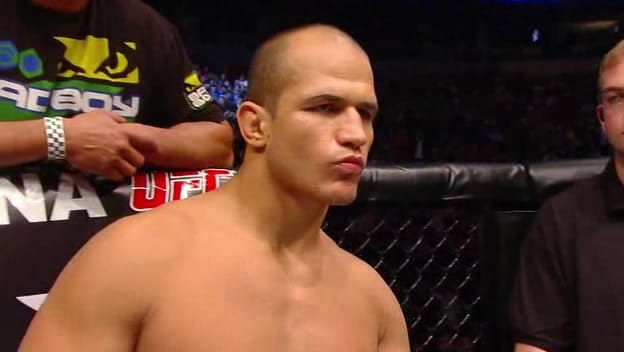 Former UFC heavyweight champion Junior Dos Santos will return to action this weekend (Saturday Dec 13th, 2014) at UFC on FOX 13. He faces Stipe Miocic in the Phoenix, Arizona hosted event, as the headlining bout for the evening. Dos Santos has been out of action since his grizzly UFC 166 loss in late 2013 to Cain Velasquez, and resides in the #2 spot in the rankings.

“Cigano” became heavily favored to win the title during his seven-fight/four-finish streak after joining the UFC, but just five fights later he finds himself in what could be described as limbo in the heavyweight championship picture. It all started after “Cigano” was awarded the title shot with his heavyweight title eliminator victory over Shane Carwin.

“The Engineer” was a tough, hard-hitting heavyweight, and proved to e the tipping point in Dos Santos’ championship hopes. He faced champion Cain Velasquez on FOX in November of 2011, in the Mexican’s first defense since snatching the belt from Brock Lesnar at UFC 121. JDS scored a 64-second knockout win, upsetting the champ and finally realising his dream of a UFC title.

A successful title defense over an outmatched Frank Mir paved way for a rematch with Velasquez after his own victory against Antonio Silva at UFC 146. What followed could only be described as a massacre. Dos Santos was ragdolled, bullied and battered at the hands of a hungry Velasquez, who left the champion swollen and defeated after five rounds. CV once again had the belt after UFC 155, and it was back to the drawing board for Dos Santos.

Apparently renewed, “Cigano” displayed a crisper and more diverse skill set in his next outing. Resurgent MMA legend Mark Hunt fell victim to a JDS knockout at UFC 160, and by spinning wheel kick, showing a new side to the former champion. Would this be enough to defeat Velasquez in the rubber match though? Evidently not.

The ex-champ was brutalized at UFC 166, succumbing to a TKO by slam and punches, in what was indeed a more gruelling fight that the second encounter.JDS had reinvented himself, yet he fell even more short than before he had done so. So what does this mean for Junior Dos Santos if he wins on Saturday night? Even with a huge knockout, what’s to say the promotion would be interested in a fourth fight with Velasquez after two dominant defeats in a row for the Brazilian?

It seems that after such a bright start, a short stint as champion, and some crushing losses, JDS is indeed in limbo. That being said, a certain Brazilian grappler could change that. Fabricio Werdum, currently the #1 contender, will face Velasquez for his title in mid-2015. This fight could indeed be huge for “Cigano”, in that he would likely be a fitting opponent for “Vai Cavalo”. JDS knocked Werdum out cold at UFC 90, and a rematch would be a no-brainer with the shortage of contenders at 265 pounds.

Best case scenario for Junior Dos Santos; beat Miocic convincingly and hope that Werdum beats Velasquez for the belt. Or hope that over Stipe will get you a fourth fight with CV (however unwise that may be). Don’t even think about losing to the Croatian sensation, because that would likely mark the end of your current title hopes Mr. Dos Santos….