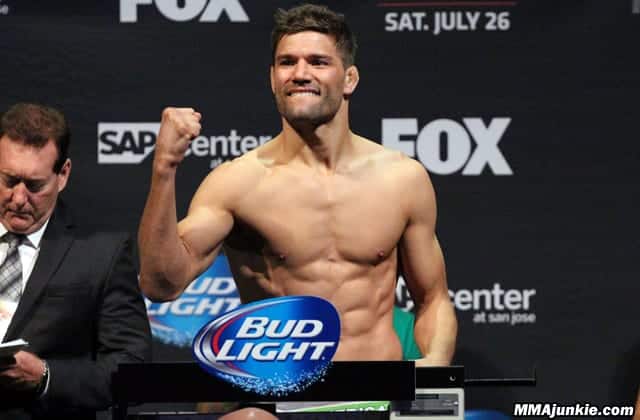 Josh Thomson has sympathised with Diego Sanchez after the UFC veteran was released from the promotion, Thomson has said Sanchez will not be receiving a reply from Dana White and the UFC. (H/T BJ Penn.)

It was announced earlier this week that Diego Sanchez had been released from the UFC, Sanchez was scheduled to fight Donald Cerrone on May 8 but that fight was scrapped.

Sanchez’s fight with Cerrone was called off after Sanchez’s team refused to clarify whether the UFC legend was suffering from either short-term or long-term medical issues.

Sanchez did still receive his full fight purse, win bonus and apparel pay from UFC officials for his bout with Cerrone.

Now former UFC fighter, Josh Thomson has spoke on the issue on an episode of his ‘Weighing In’ podcast with John McCarthy.

“I feel for Diego. I want everything to be good for Diego. Okay and Diego makes some very good points. The UFC, because it is like we’ve talked about before, the UFC is not gonna reply to him.” Thomson said. “We have talked about it with what is his name… Spencer Fisher. Same thing, like they (the UFC) just stop picking up your calls. They are not going to pick up your calls. Their doctors are not going to answer your calls anymore. You’re not a current fighter. There is no relationship anymore. And so that is the one thing, that if we are ever going to do a union for, it is for this.”

Diego Sanchez’s relationship with the UFC turned sour after his coach, Joshua Fabia asked the UFC to provide medical records for Sanchez.

Josh Thomson then went on to explain further about how fighters like Sanchez are going to want medical assurances once they officially leave the UFC.

“Now you’re going to start seeing some of these fighters, especially the top ones that have been around for a long time, they are going to want to be able to come back and get some form of medical help for everything that is going on with them, and it is not going to happen. So when we talk about like the Ali Act, I could give two shits about the Ali Act, I care more about let’s get some sort of insurance fund for the fighters for after.”

Do you think fighters should be given medical assurances after competing in the UFC?