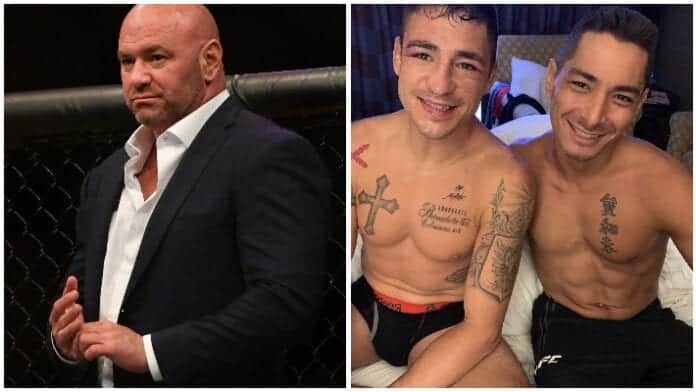 Dana White has spoken out for the first time since Diego Sanchez was cut by the UFC.

‘The Nightmare’ was scheduled to fight Donald Cerrone on May 8 but that bout was recently scrapped due to confusion about the health status of Sanchez.

Ahead of his bout with Cerrone, the Ultimate Fighter Season One Winner passed the mandatory medical tests. However, an issue arose when Sanchez and members of his team refused to confirm if he was suffering from any short-term or long-term medical issues.

After some back-and-forth with the UFC’s Chief of Business Officer, Hunter Campbell, Sanchez said via his lawyer that he was unable to confirm his health status because he’s not a neurologist and hadn’t seen one. That response triggered Sanchez’s release from the UFC on April 27.

In the aftermath of Sanchez’s release White spoke of his great relationship with the UFC Hall of Famer while taking aim at “creepy” Joshua Fabia.

“I have an incredible, amazing relationship with Diego and I like him very much and I hope he is OK,” White told Yahoo Sports. “One of the sad things that happens, not just in fighting but in sports, and I want you to quote me on this, are these creepy weirdos who come from God knows where and leech onto fighters or athletes. They never do any good for them.

“Somehow, this creep got into Diego’s life and has been controlling him. You saw the video of him chasing guys in the Octagon with a knife. How [expletive] nuts is that? He goes to the commission and tells them that he’s taught Diego this death touch. It goes on and on with this guy. He goes into the [fighter-broadcaster] production meeting and tells the commentators what they should be saying? The guy is bats*** nuts. He worked his way into Diego’s life and has gotten control over him. I just want the best for Diego.”