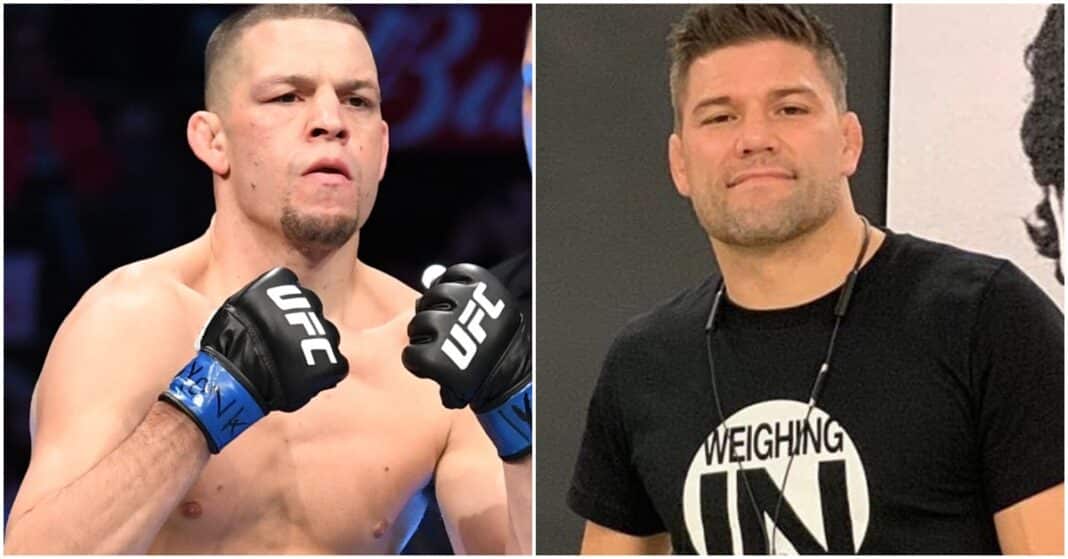 Former Strikeforce champion Josh Thomson claims Nate Diaz will be leaving the UFC after his next fight.

The fan favourite hasn’t fought since dropping to a decision defeat against Leon Edwards at UFC 263 in June. Diaz was outgunned for large portions of the history-making five-round fight but almost sprung an upset in the dying embers of the bout. Diaz had ‘Rocky’ on wobbly legs in the final frame but was unable to capitalize fully before the round and fight came to an end.

A fight between Diaz and Vicente Luque has been on the table for some time now but is yet to be signed. MMA manager Ali Abdelaziz revealed that Diaz has a contract issue with the UFC which is holding up negotiations.

Dana White later confirmed rumours that Diaz has just one fight on his UFC contract and claimed he was working to book the Stockton, California native in what could be his final fight for the promotion.

Former Nate Diaz Opponent Claims He Will Leave The UFC

According to Bellator commentator and popular podcaster, Thomson, his former foe is dead set on leaving the UFC when his contract expires.

“I want you guys all to know this. He [Nate Diaz] is leaving the UFC.” Thomson said on his ‘Weighing In’ podcast with John McCarthy.“He’s fighting Jake Paul. They’re going to fight. That fight’s gonna happen.”

White seemed relaxed about Diaz’s contract situation during a recent chat with TSN. The UFC boss said that if Diaz thinks he can still compete with the best in the world he’ll sign a new multi-fight deal to fight in the UFC.

“That’s up to him,” White said when about Diaz’s future. “I mean that is a decision he needs to make. Listen, for a lot of these guys… There’s no secret about it. If you believe that you are one of the best in the world and if you believe that you can win a world title here, or hang with the top five. Then this is where you should be. The minute you start doubting that is the case, you’ve got to start looking at other options.” (Transcribed by BJPENN.com)

Do you think Josh Thomson is right? Will Nate Diaz leave the UFC when his contract is up?