LowKickMMA.com
Home UFC News Jose Aldo backs himself over Anderson Silva as the greatest Brazilian in... 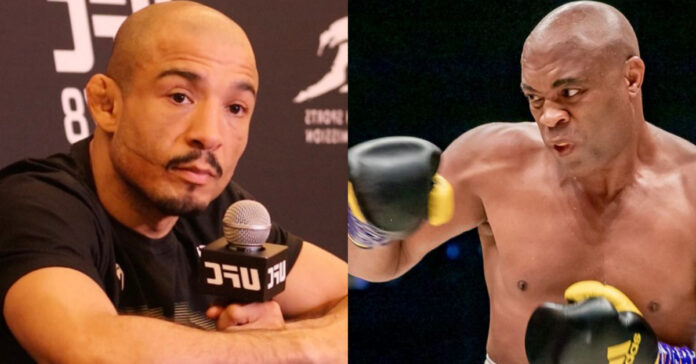 Jose Aldo put himself over the likes of Anderson Silva and Amanda Nunes as the greatest Brazilian mixed martial artist in history.

The former UFC featherweight champion enjoyed one of the most successful careers ever, spanning a period of dominance between 2006 and 2015. He went undefeated for nearly a decade until the former two-division champion Conor McGregor dethroned him by setting the record for the fastest title fight finish in just 13 seconds.

In an appearance on the show Cara a Tapa, Aldo made his case for being the greatest fighter to come from Brazil.

“That´s easy, myself,” he said (ht Sherdog). “I won the title twice, dropped my weight, and I could very well get an opportunity to fight for the title again. I respect everyone’s history, but I’m the best. I took on a new challenge, I lowered my [weight class], I lined up everyone, I did it for the title, I lost, I recovered again and I was doing well until I stumbled again. I’m the [best Brazilian] in history.”

Fedor Emelianenko is widely regarded as one of the greatest combat sports athletes ever, and Aldo shares the same sentiment. The former Pride Fighting Championship king went on a nine-year win streak and continues to compete to this day as a top-ranked Bellator heavyweight contender.

Jose Aldo acknowledged the illustrious resumes of former UFC champions Demetrious Johnson and Georges St-Pierre, he placed Emelianenko above both.

“Of achievements like that, [there is] Demetrious Johnson, who is a [lighter] weight that nobody talks about because he is tiny. But Georges was also a big name,” Aldo said. “But for me,  [it’s] Fedor. For me, he’s one of the icons. When the guy stayed 10 years [undefeate]), I said: ‘Damn, I want to beat this guy’s record.’”

Do you agree that Jose Aldo is the greatest Brazilian?