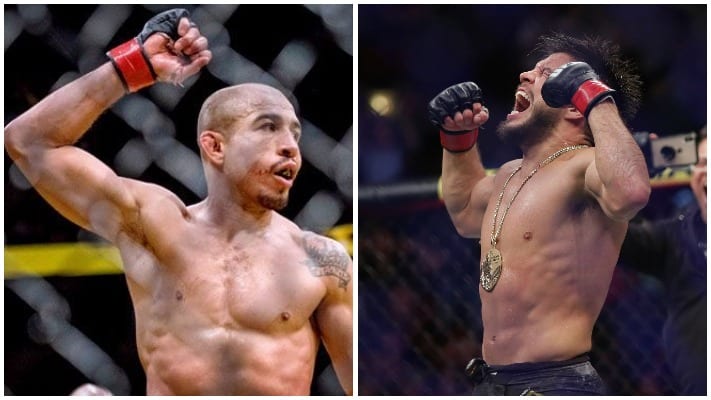 Jose Aldo has accepted Henry Cejudo’s challenge as he remains serious about a move down to bantamweight.

Aldo recently made headlines when he claimed he was ready to make the move to 135 pounds. The Brazilian, of course, was the longtime featherweight champion and had trouble making 145 pounds. However, he seems ready to make the cut if he gets a crack at Cejudo’s title.

Cejudo would respond to Aldo soon after:

“I think it’s crazy, these last couple months, that we’ve had legends — so-called legends — like Urijah Faber, Frankie Edgar and Jose ‘Waldo’ coming down to my weight division,” Cejudo said (via BJ Penn). “As a matter of fact, Jose Waldo, the self proclaimed ‘King of Rio,’ let me tell you who ‘Triple C’ is. Olympic champ, flyweight champ, and now bantamweight champion of the world. I’m the king of the world. You can do me a favor, and you can bend the knee too. One last thing: your movie sucks.”

Aldo would respond with a barb of his own, calling the two-weight champion a gnome and asking him for a date and location:

“We accept the challenge. Just say when and where and I’ll be there to beat your ass and add another gnome to my collection!” he wrote.

Aldo also responded to UFC president Dana White. White was asked about the potential move to bantamweight and seemed to play it down as he didn’t see Aldo making the weight.

However, the former featherweight king is serious and even claims to have done a test to see if he can make the cut.

“When I talk about something I”m talking seriously and for real,” Aldo tweeted White. “I already made a test and I can make this weight!”

What do you think of this potential matchup? Do you think Aldo can make the weight in the first place?