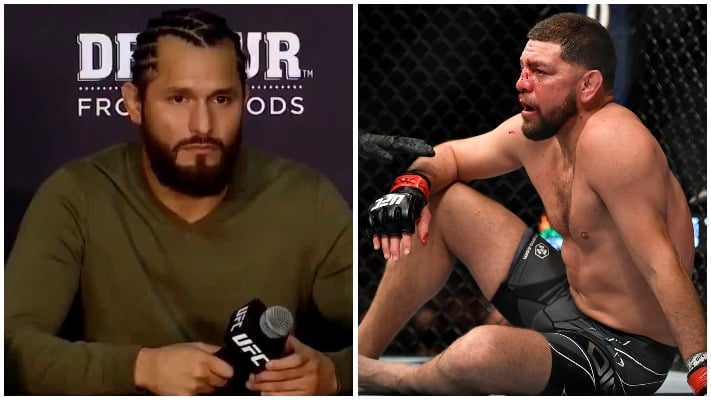 Jorge Masvidal seems to have gone off the idea of fighting Nick Diaz after watching the former Strikeforce champion make an unsuccessful comeback at UFC 266.

Diaz returned to the Octagon following a six-year hiatus last weekend when he rematched Robbie Lawler. ‘Ruthless’ managed to avenge one of his most famous defeats 17 years later as he stopped Diaz inside three rounds.

The end of the fight was not something you’d expect to see from the usually tough Diaz who dropped to the floor in the third frame and refused to stand up, forcing the referee to wave off the fight.

Ahead of UFC 266, ‘Gamebred’ had been vocal about wanting to square off against Diaz if he emerged victoriously. After watching the Stockton, California native in action Masvidal has changed his tune completely.

“I’ve watched Nick fight a ton. I like Nick Diaz as an athlete, as a fighter, Masvidal told MMA Uncensored. “I don’t know where he’s coming from. I don’t know if he needed the money, because like (Dean Toole) said, it didn’t look like he wanted to be that way. It didn’t look like he wanted to be there in fights. So maybe he’s coming from a different place that I don’t understand when you got to get a paycheck. God bless him. But as far as Nick Diaz that we’re used to seeing is concerned, he’s not the same guy.”

Masvidal says he only wants to Diaz fight again if he is full prepared to go whatever the contracted amount of round. The BMF titleholder is concerned that Diaz could tarnish his legacy by taking more fights he’s not properly prepared for.

“Obviously, I would want to see him come back 100 percent healthy, 100 percent in shape, ready to do that for three rounds or five rounds, whatever the contract dictates,” Masvidal said. “I would just like to see him back in there but with a full tank of gas. If not, I don’t want to see him tarnish his legacy because he does have a great legacy.” (Transcribed by Sportskeeda)

Do you agree with Jorge Masvidal? Does Nick Diaz risk tarnishing his legacy if he continues to fight?