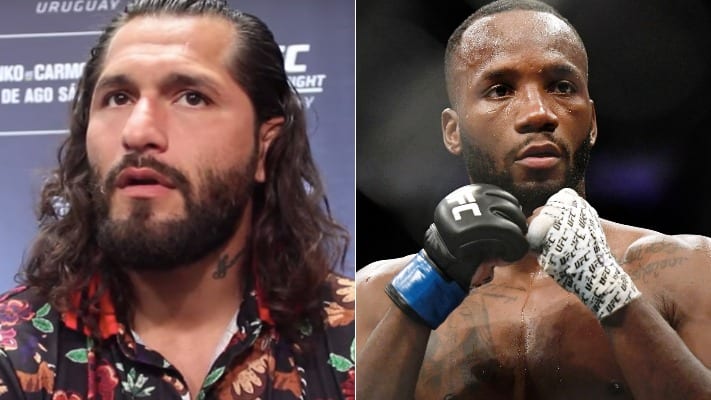 Leon Edwards recently claimed that Jorge Masvidal turned down a fight with him. However, his manager, Ibrahim Kawa, shot down that notion, claiming a title shot was already negotiated to be Masvidal’s next bout.

Masvidal himself got the opportunity to respond to Edwards’ claims during a media scrum as a guest fighter at UFC Uruguay yesterday (Sat. August 10, 2019). “Gamebred” told MMA Fighting the UFC hasn’t sent him anything with mention of Edwards on it. He also vowed a fight with the Englishman will happen. But it’ll be on his own terms.

“The UFC hasn’t put a contract in front of my face with Leon’s anything,” Masvidal said. “Because they know we’re not about petty sh*t. I’m only looking up. I already – when they first offered me the fight in England, I said, ‘who’s the best guy that I can get my hands on over there?’

“They said [Darren] Till. I said, ‘Let’s do it.’ And what did I do? I got in a f*cking plane, I went over there and gave it all I had. A fight, I like to fight. Leon, then was sh*t, still is sh*t, in my opinion. I’m going to kick his ass. It’s not going to be on his terms or whenever the f*ck he wants it. It’ll always be on mine, and that’s what bothers him so much inside.

“He’s gotta look at this interview, or people are going to call him and tell him – you’re a f*cking nobody. I run this show, you listen to me. When I say I’m going to kick your f*cking ass, I’ll kick your f*cking ass. I’m gonna get paid now, like I said, 16 years I’ve been chasing this dream of getting the belt. You think I’m going to let some f*cking bug like this guy even slightly throw me off my road, my destiny, towards my greatness towards the belt?

Edwards, while not a majorly popular name in the welterweight division, is still one of the best at the weight class. He is currently on an impressive eight-fight win streak over notable names such as Donald “Cowboy” Cerrone, Gunnar Nelson, and Rafael dos Anjos. However, Masvidal is glad many consider Edwards to be a skilled fighter. It’ll make the victory that much sweeter for the Floridian.

“I’m so happy,” Masvidal said. “I’m so happy that he’s winning, and I’m so happy that maybe somebody might think that he’s a fight worthy – because everybody was saying Ben [Askren] was an amazing fighter before I fought him and all this grappling stuff. But after I five-seconded his ass, they’re saying he was overrated.

“And the fight will take place when the f*ck I say so. So sit there and eat that f*cking words. Ugh, I’m gonna break that guy’s face, man. Interviews are over, man. You guys got me all f*cking hyped up for nothing, man.”

Masvidal comes off back-to-back knockout victories over some of the welterweight division’s elite. It started with Darren Till earlier this year, who Masvidal knocked unconscious in the second round of their UFC London showdown. He followed that up with a record-breaking finish at UFC 239 that shook the mixed martial arts (MMA) community.

The undefeated Ben Askren was handed the first loss of his career when Masvidal nailed him with a flying knee right out the gate. Askren shot in on an immediate takedown, and Masvidal was ready for it, brilliantly countering with a knee that put “Funky” out cold in five seconds.

It marked the fastest knockout in UFC history. Now, Masvidal is holding out for a title shot, or a big-money fight. It remains to be seen who the UFC matches him up with next.

What do you make of Masvidal’s response to Edwards? Do you want to see them fight?