LowKickMMA.com
Home UFC News Jorge Masvidal Says He Would ‘Give Everything’ To Kill ‘Little Boy’ Conor... 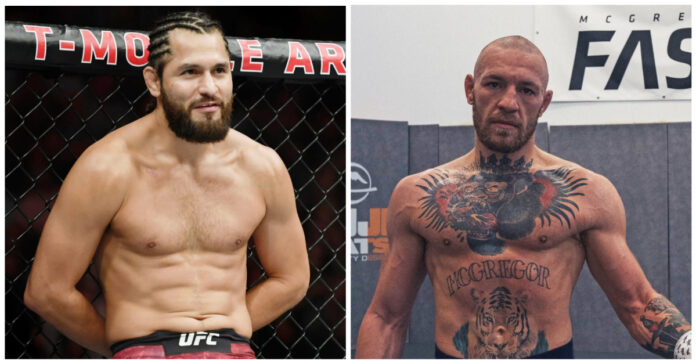 UFC welterweight Jorge Masvidal says he would ‘give everything inside me to kill’ superstar Conor McGregor if the pair were to meet.

Ever since ‘Gamebred’ captured the BMF championship against Nate Diaz at 244, a rivalry between Masvidal and McGregor has been brewing. The pair have exchanged jabs online, at press conferences, and in interviews, but a potential mega-fight has yet to materialize.

However, now may be the perfect opportunity as both men are coming off losing streaks and would need some kind of significant win to get themselves back in serious title contention.

Talking to ESPN Deportes, Jorge Masvidal, shared his thoughts on the potential matchup. “He is false,” Masvidal began. “He knows that I am a man who hits hard and that I come to kill. I do not come to hug in the cage. I am going to give everything inside me to kill him. I have a little size but he is still a little boy.”

‘Gamebred’ would explain, that while the McGregor fight is a huge opportunity, he won’t sit around and wait for it and he has opportunities outside of the potential matchup.

“I would love to fight at 170 pounds,” Masvidal Continued. “But I don’t wait for anyone. If he wants to do it, I’ll break his face. If he doesn’t want to do it, let someone come next. There are options, but the first thing that matters is me – to be in the best condition of my life, to improve the fight. This year, I’ll guaranteed return. I don’t know the date yet. I think that with two fights, I can be in contention for the title or in a title contender fight.”

Although UFC president Dana White was initially against the matchup, claiming McGregor would be ‘too small’ for Masvidal; it now seems that with the extensive time off, McGregor may have put enough size on to make the matchup feasible.

“I saw McGregor in Dublin. He’s not small. He looked like he walks around 195-200lbs jacked,” Masvidal tweeted.

McGregor is also no stranger to 170lbs, fighting both Nate Diaz and Donald Cerrone at the weight. The Irishman has also made claims of wanting to return at welterweight, tweeting such things as:

What do you think of a matchup between Jorge Masvidal and Conor McGregor?