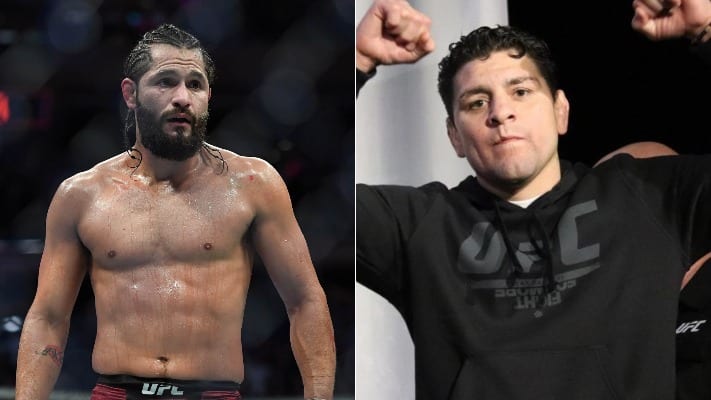 Before there was even hope that Jorge Masvidal could fight Conor McGregor, fans speculated that “Gamebred’s” next opponent could be former welterweight title challenger Nick Diaz.

Masvidal headlined UFC 244 on pay-per-view (PPV) this past November against Nick’s younger brother, Nate. Leading up to the fight, Masvidal continuously said he was going to “baptize” the younger Diaz brother. When they finally met inside the Octagon, Masvidal put on a clinic, knocking down Diaz several times before scoring a TKO win by way of a doctor’s stoppage before the beginning of the fourth round.

In the aftermath of the fight, Nick, who was in attendance for UFC 244, expressed interest in fighting Masvidal to avenge his brother’s loss, taking offense to the Floridian’s “baptize” comments. While Diaz has stated that he is returning to the UFC, there hasn’t been news of any movement to make that happen. However, Masvidal, “out of pure coincidence and luck,” tells Ariel Helwani that he just spoke to Nick Diaz‘s manager.

Masvidal didn’t go into specifics of their conversation, but said he was told some very “interesting” things. (H/T MMA Mania)

“Out of pure coincidence and luck, I just spoke with Nick Diaz’s manager. And it was interesting with a lot of different insight because UFC is saying one thing and it’s completely different from what we were hearing.

“To hear it now from Nick Diaz’s manager, things make a lot more sense now. UFC was telling us all kinds of crazy things and, I’m not willing to wait for no man. They were telling me this, and that and this … we got options,” Masvidal said.

The UFC’s BMF Champion has made it no secret that his top priority at the moment is to get paid. Fights against the likes of Nick Diaz or Conor McGregor will do exactly that for him. Of course, he can’t forget the UFC welterweight title opportunity awaiting him with a fight against Kamaru Usman, who Masvidal truly doesn’t like as a person.

“Who is going to get me that nice chunk of change that someone like me that has been fighting 16 years professional and busting ass? If it’s up to me, I respect Nick, him and his brother, I got a lot of respect for Conor for what he’s done inside the cage. But Usman, I don’t like his ass one bit. I just want to fuck his ass up. He’s just a punk, the same guy that five or six years ago was asking me to take pictures.”

Masvidal and Usman actually got into a verbal altercation this week at Super Bowl media day. Thankfully, security was there and stepped in between the two men before things could turn physical. With that being said, it will be very interesting to see who Masvidal is officially matched up against next.

What do you think about Masvidal’s comments on speaking with the Diaz camp?