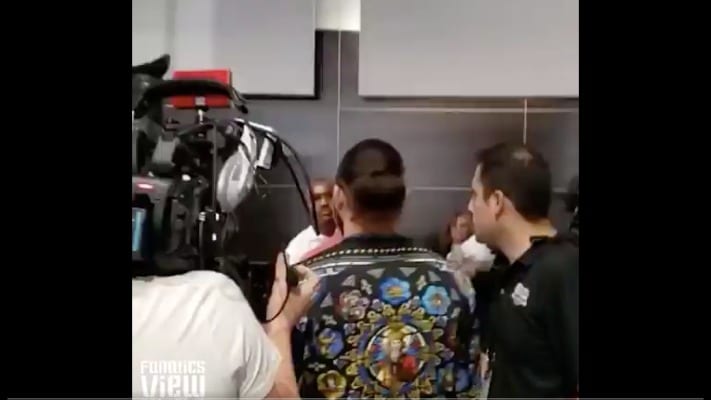 If a fight with Conor McGregor doesn’t materialize, Jorge Masvidal very well could get to settle his personal differences with UFC welterweight champion Kamaru Usman.

Things nearly got physical today (Wed. January 29, 2020) at the Super Bowl media day in Miami, Florida, when both Masvidal and Usman were walking around doing interviews. At one point, both men crossed paths, which led to a verbal altercation between the pair. Usman confronted Masvidal on his recent trash-talk, saying “Do something, I’m standing right here, do something,” Usman shouted.

Had security not been there to separate the two, there’s no telling what kind of brawl might have broken out at Super Bowl media day. Check out the footage from the confrontation below.

Usman is currently dealing with a hand injury, hence the cast, coming off a successful welterweight title defense this past December. “”The Nigerian Nightmare” finished Colby Covington in the fifth and final round of their UFC 245 main event after breaking Covington’s jaw midway through the fight.

Now, he’ll likely take on Masvidal next, who is coming off a Fighter Of The Year run in 2019 with three TKO or KO finishes. Masvidal finished Darren Till, Ben Askren, and Nate Diaz to inject himself into the title conversation. Whether or not he’ll officially get the next crack at the gold remains to be seen.

What do you think of the altercation between Masvidal and Usman?