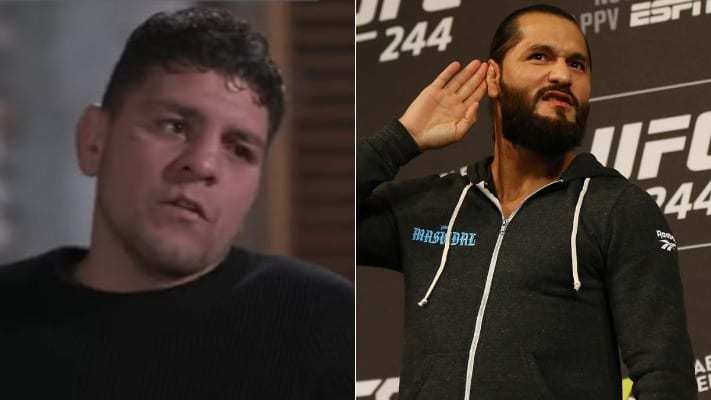 There have been a lot of rumblings suggesting Jorge Masvidal and Nick Diaz could be throwing down next.

However, nothing has come to fruition quite yet. Masvidal comes off a controversial TKO win over Nick’s younger brother, Nate, via a Doctor’s Stoppage, in the main event of UFC 244 last month. Shortly after, Nick expressed interest in wanting to fight Masvidal in order to avenge his baby brother.

The interest was returned on Masvidal’s end as well, but there’s still a long road to go before a fight with Nick and Masvidal can be made. Speaking to Fansided MMA, Masvidal noted he’s not waiting around for a fight with the older Diaz brother, but if the fight eventually winds up happening, then that’s great.

“No, we’re not really. Time waits for no man. Nick’s got his own thing going on. When he gets cleared by USADA and everything comes correct, who knows when that time will be. I’m not waiting for no man,” Masvidal said.

“So, if it happens, it happens. I’m just waiting for the biggest paycheck possible. If it’s Conor [McGregor] if it’s Floyd [Mayweather]. If it’s Nick. The quickest one and the one with the most dollar signs attached to it. That’s all it is.”

To those who suggest Masvidal is in this just for the money at this point, you’re exactly right. Masvidal detailed how he has scratched and clawed his way up in the game to finally get to the position he’s in now. With the self-proclaimed “lottery ticket” now in hand, “Gamebred” has every intention of cashing in big.

“I’ve been in this sport for 16 years and to those new people listening or just saying, “Oh, he’s a money-hungry wh**e”. You’re right. I’m a wh**e. But, I’m also money hungry because I’ve been doing this 16 years. I fought the best of the best. Never said no, never had an injury to have me pulled out of a fight. I never missed weight.

“I played everything to the way that you’re supposed to, to earn these paychecks, so now I’m in a position to get big paychecks. I’m going to cash in on them. No matter what. I got different lottery tickets in my hand. It’s just a matter of time when I stop being lazy, go to the gas station and turn the scratch-offs in because I’ve been working for them. I already got them. Now, I just gotta go cash them in.”

Do you think Masvidal and Diaz will eventually fight each other?