LowKickMMA.com
Home UFC News Jon Jones Plans to be in Peak Condition this June/July but Still... 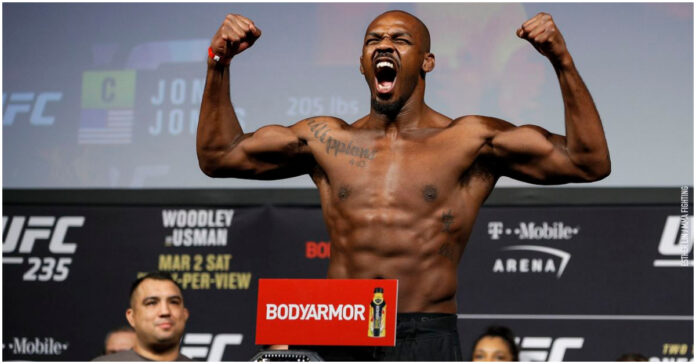 Former UFC light heavyweight champion Jon Jones has stated his plans to be in peak fighting condition by the time June and July come around.

Making his last outing in a razor-thin decision win against Dominick Reyes in February 2020, Jon Jones has chosen to remain on the sidelines for the last two years in an apparent move up to the heavyweight division. ‘Bones’ has been hard at work bulking up his frame as he gains weight to match the behemoth-like stature of the heavyweight fighters.

While there has been a lot of speculation around his return, nothing is certain yet on when that will be. Jones has been involved in multiple controversial incidents stemming from his personal life as well as contractual disputes with the organization that has made it harder for the once-dominant champion to return to the octagon.

In response to a tweet, Jon Jones clarified that he has not been offered a fight and plans to be in peak condition this summer.

Who will Jon Jones fight in his return?

Jon Jones has made it clear that his time at light heavyweight is over following an introspective look at his last fight at 205 lbs.

The youngest champion in the promotion’s history was rumoured to be in talks for a fight against the heavyweight champion Francis Ngannou. However, Ngannou looks like he’ll be out for the rest of the year as he recovers from his knee surgery. That would have been a great match-up to see and one that we may get in the future but don’t hold your breath for it as both ‘Bones’ and ‘The Predator’ want better deals to make the fight happen.

UFC president Dana White hinted at the possibility of Jones getting an interim title shot in his divisional debut if Ngannou is to sit out for a year.

Stipe Miocic, the greatest heavyweight of all time, is leading the race to face Jones in his return for the interim belt but it seems like the fight has not yet been offered.

If a fight between Ngannou and Jones is to happen, it’s likely that it won’t be Jones’ first fight at heavyweight. It’s important for him to test out the waters and get acclimated to the progress of the game against someone who he may feel more comfortable with than Ngannou.

Do you want to see Jon Jones take on Stipe Miocic in his return?