LowKickMMA.com
Home UFC News Jon Jones: I’ll Have A Beer With Johnny Walker…After I Beat Him 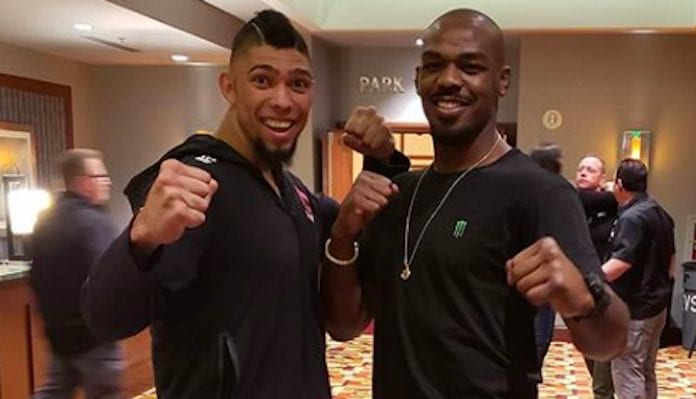 One of the fastest-rising stars in the UFC at the moment is light heavyweight knockout artist Johnny Walker.

Walker comes off back-to-back knockout victories coming in at just under a minute. The latter came against proven veteran and top-ranked Misha Cirkunov. Now, Walker is ready to prove himself against the division’s elite, calling out the likes of three-time title challenger Alexander Gustafsson.

If Walker is able to topple the likes of Gustafsson, Anthony Smith, and others, he might be on his way to a match-up against division king Jon Jones. Speaking to The Mac Life recently, “Bones” revealed he’s “very aware” of what the young Brazilian is doing in the division at the moment:

“Johnny Walker is somebody that I’m very aware of,” Jones said. “I know I’m gonna be fighting him sooner or later. I just appreciate his energy. He seems like a nice guy, he just radiates his happiness and his positivity, and it’s refreshing.

“He seems like the type of guy I’d go out and have a beer with. He’s cool. He seems cool… until we fight. And then after I beat him, he’ll be cool again.”

While Walker might take a while to reach a title opportunity, Jones has no shortage of . Thiago Santos is believed to be the next man up to challenge for Jones’ 205-pound throne.

“Bones” is coming off a successful title defense at UFC 235 weekend (Sat. March 2, 2019). He defeated Anthony Smith in the main event of UFC 235 via unanimous decision.