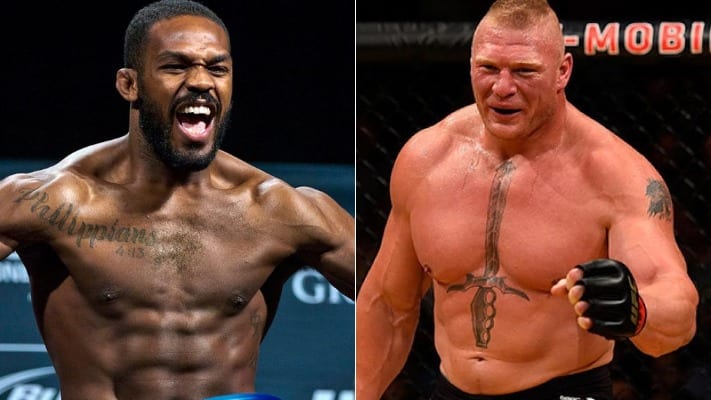 Jones will headline UFC 232 against Alexander Gustafsson in Las Vegas. Yesterday (Fri. November 2, 2018), Jones and Gustafsson participated in a pre-fight press conference in New York. While most of the attention was on their upcoming fight, Jones was asked to look a bit into the future.

Prior to getting suspended by the United States Anti-Doping Agency (USADA), Jones defeated Daniel Cormier for the 205-pound championship. After the victory, Jones proceeded to call out Brock Lesnar for a super fight at heavyweight. However, due to his failed USADA test, that fight never had the opportunity to happen.

Instead, Cormier recaptured the light heavyweight title, and will now seemingly fight Lesnar next year if all goes according to plan for “DC.” Jones was asked today if he’s still open to a fight with the current WWE Champion down the road. “Bones” said he’s still very much interested in testing himself against “The Beast”:

Who Will Lesnar Fight?

Interestingly enough, Lesnar won the WWE’s Universal Title yesterday in Saudi Arabia. It remains unclear what his status is with the UFC. However, he’s still being tested by the United States Anti-Doping Agency (USADA).

As of this writing, the plan seems to remain for Lesnar vs. Cormier to happen in early 2019. But don’t expect a similar scene to July’s UFC 226 where Lesnar stormed the Octagon to talk some trash and shove Cormier. UFC President Dana White confirmed he wouldn’t be attending the title fight this time around: