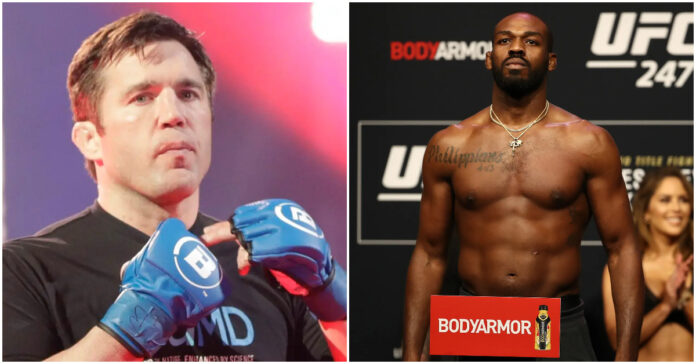 Chael Sonnen was charged this month with a felony count of battery by strangulation and 10 misdemeanor counts of battery related to the alleged attack. The felony and 10 misdemeanor battery counts were later filed on March 16. He’s facing accusations of attacking a couple without ‘provocation’ during his alleged ‘rampage’ on December 18.

Jon Jones took to Twitter to put his critics on blast including Dan Hooker and Brendan Schaub, in light of the recent allegations against ‘The Bad Guy’:

“Dan Hooker, Brendan Schaub, Is this what you guys are jumping down my throat about?

“Man everyone and their mom covered my story when I was an asshole in Las Vegas, Sonnen allegedly attacks his wife, another woman along with like five men and crickets.” (h/t BJPenn.com)

The history behind Jon Jones and Chael Sonnen

Jon Jones and Chael Sonnen have been feuding for a while now with the pair exchanging words on social media. ‘The Bad Guy’ slammed Jones for blaming his latest arrest on the devil after the former UFC champion was arrested on the same night he was inducted into the Hall of Fame for his epic first fight with Alexander Gustafsson.

Jones was accused of battery domestic violence as well as injuring and tampering with a vehicle.

Reports of the alleged hotel brawl broke out in December last year resulting in Chael Sonnen being hit with five battery citations. As per the online court records, the five misdemeanor citations in January were dismissed by a judge. Jon Jones responded to the initial incident on social media:

“Chael Sonnen, I’m not gonna sit here and celebrate you getting battery charges against a female last night. That would make me like you, and I’m nothing like you. Instead I will wish your family well, I wish the victims family well.”

UFC fighter Dan Hooker weighed in on the initial comments with a Tweet:

“Imagine beating up 5 people and not one of them is your wife. (JJones RN )” – Hooker posted on Twitter.

It’s clear Jones was not pleased with the early exchanges and took the chance to hit back at his critics. However, the former champ may be getting ahead of himself as the allegations remain unproven which means Sonnen has not been found guilty yet. It’s only a matter of time before more details emerge to prove Sonnen innocent or guilty.

Is Jon Jones getting ahead of himself by putting Chael Sonnen down based on allegations instead of guilt?