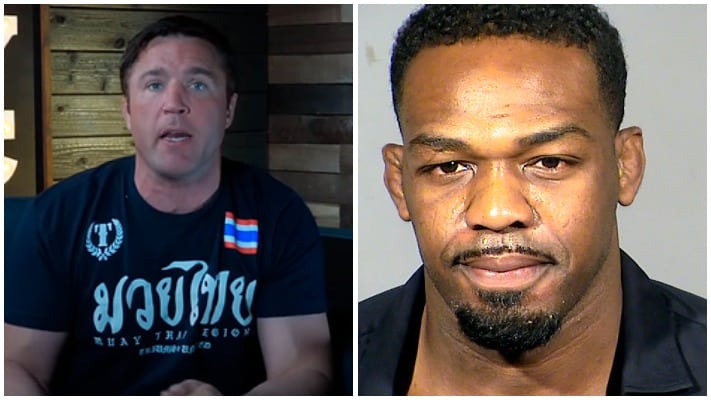 Chael Sonnen has let rip at Jon Jones who he says blamed his latest arrest on the devil.

The former UFC light-heavyweight champion was arrested on the same night he was inducted into the Hall of Fame for his epic first fight with Alexander Gustafsson. Jones stands accused of battery domestic violence as well as injuring and tampering with a vehicle.

Following his arrest, Jones took to social media posting a series of motivational quotes including one which read, “What the devil means for bad, God means for good.”

In an episode of Beyond the Fight, Sonnen addressed Jones’ arrest and his subsequent social media activity.

“Now, he (Jon Jones) has only got three options, okay? You can bury your head in the sand, do absolutely nothing, keep your mouth shut. You’ve got a legal process. You can bury your head in the sand. You can change the topic or you can apologize,” Sonnen explained. “Now, of those three, Jon is never going to admit fault or say he’s sorry and potentially, doesn’t even know how to say that. So, he has now blamed the deity on his actions. He actually blamed the devil for his behaviour.

“Never said that he was sorry. Back in the gym, working on himself,” Sonnen continued. “Going to make this the greatest thing that’s ever happened in his life. When you get knocked off a horse, you get right back on it. These things would be good and meaningful perspectives had Jon been knocked off a horse. He’s not accused of being fallen off a horse. He’s accused of coming into a room at five in the morning and beating the hell out of a woman in front of her children. That’s what he’s been accused of. And if he’s saying that it could be bad but he’s going to mix it into a positive, that’s an admission of guilt.” (Transcribed by Sportskeeda)

Do you agree with Chael Sonnen? Is Jon Jones failing to take responsibility for his actions?