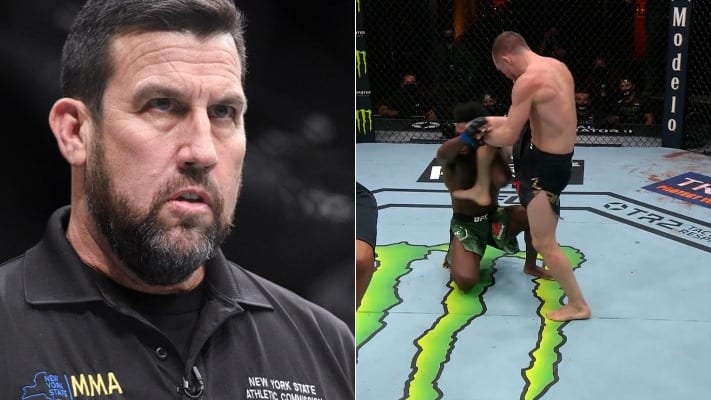 In one of the most controversial championship fights in recent memory, Petr Yan was disqualified from his title defence against Aljamain Sterling after throwing an illegal knee. The subsequent fallout has seen the MMA community split in a multitude of different ways.

One take is that Sterling overacted the subsequent knee to the head in order to have the fight called off. On the Weighing In podcast, ‘Big’ John McCarthy and Josh Thompson seemed to follow this school of thought.

On a recent video released on the Fight CAT Youtube channel, the two MMA personalities broke down the events that took place. McCarthy actually placed some of the blame on referee Mark Smith for discussing the potential implications of Yan landing the illegal knee with the doctor, within earshot of Sterling. McCarthy had the following to say:

“”I’m gonna get eaten up by some people, especially Ray Longo. But I’ve seen Aljo take some big shots, he’s a tough dude. When you look at that knee, and you look at that initial response. And then look at what occurred. I’m not sure that it was affecting him as much as it was coming out.”

“But once he hears I’m gonna get a win here, that’s money. I’m not saying he made a bad decision. It’s called business, and you’ve got to make a business decision. If that’s what occurred I don’t blame him.”

It is notable that last time Aljamain Sterling took a knee clean to the head, he was knocked out by Marlon Moraes. Regardless of how hurt he was, Yan’s actions were unarguably illegal and he was rightly disqualified. An immediate rematch appears to be the most likely next step for both fighters. However Sterling has professed that he would also be interested in a matchup with the former champ, Henry Cejudo.

What are your thoughts on John McCarthy’s Comments? Who do you see winning the subsequent rematch? Let us know in the comments.