LowKickMMA.com
Home UFC News Aljamain Sterling Eyes Henry Cejudo Bout: ‘We Can Do This Fight Next’ 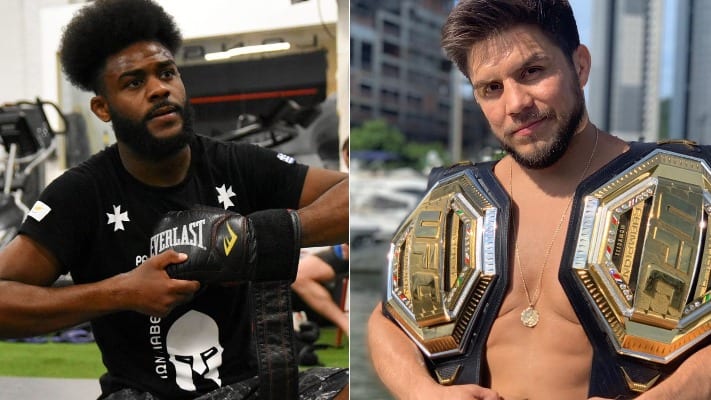 The new UFC bantamweight champion, Aljamain Sterling is hoping to forgo a rematch with Petr Yan and instead fight former two-weight king Henry Cejduo next.

Sterling won the 135lb belt in unfortunate circumstances at UFC 259.

‘The Funkmaster’ was clearly losing to Yan through four rounds before the Russian landed an illegal strike.

Sterling hit the ground and Yan threw a knee which connected clean.

The American was unable to get back up, ultimately Yan was disqualified, and Sterling was crowned the new champion.

Sterling initially refused to accept the belt but was later seen posing with it for pictures.

Yan then began to attack his opponent on social media.

Meanwhile, Sterling ran into former dual-weight champ, Cejudo and is now hoping to fight him next rather than take a highly anticipated rematch with Yan.

“All that talking stops when face to face! We can do this fight next instead” Sterling wrote to UFC president Dana White on social media.

Cejudo retired from the sport last year after successfully defending his bantamweight title against 135lb legend Dominick Cruz at UFC 249.

‘Triple C’ has stayed in the limelight by calling for a fight with featherweight champion Alexander Volkanovski and seems destined to make a comeback in 2021. Could it be against Aljamain Sterling?

Do you want to see Aljamain Sterling fight Henry Cejudo next?