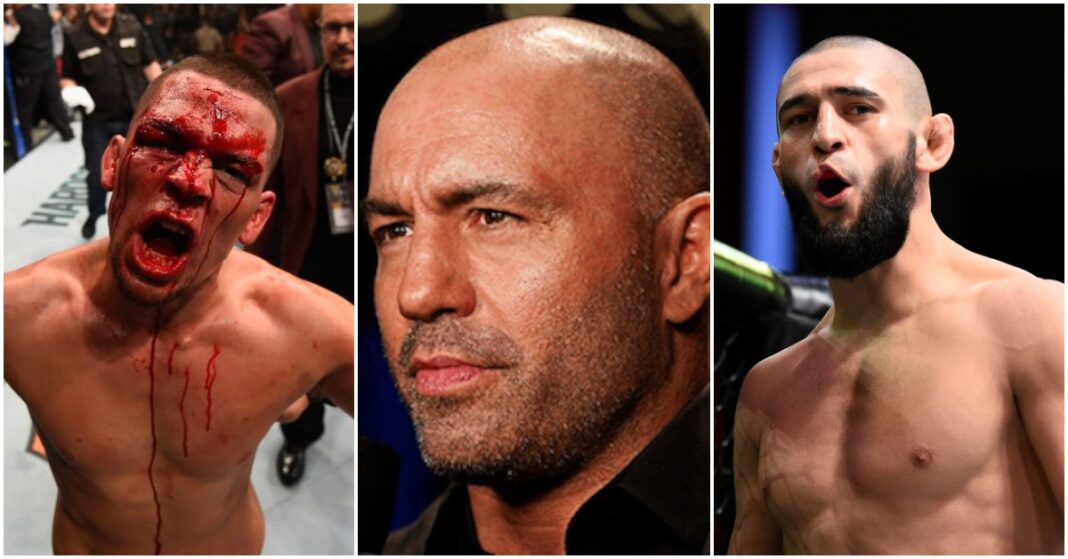 Joe Rogan has given his opinion on the potential bout between one of the most talked-about welterweights in Khamzat Chimaev and Stockton’s own Nate Diaz.

Khamzat Chimaev recently broke into the top ten rankings of the welterweight division with an impressive win over fan favourite Li Jinglaing at UFC 267.

Diaz is coming off a loss against highly ranked Leon Edwards where it looked like Nate was being dominated the whole fight before he almost sprang the upset in the fifth and final frame.

During a recent episode of the Joe Rogan Experience, the UFC commentator discussed who might be next for ‘The Wolf.

“I want to see him against a top flight guy,” Rogan said. “Neil Magny will show you what you are… Nate Diaz will find out if your for real. Nate Diaz- like with Leon. Nate Diaz getting- losing that fight until the fifth round and then cracking Leon, and having Leon in real f***ing serious trouble… Nate is a beast. He’s such a f***ing warrior… What I like is Nate getting paid. You know, if Nate gets paid big for that fight, if they set up a main event somewhere. With Khamzat and Nate for like a title elimination fight. I think if every fight went 100 round Nate would never lose.” (Transcribed by Sportskeeda)

UFC president Dana White has hinted that Diaz could be next for Chimaev. However, with all the other top welterweights seemingly tied up in fights, it now appears that Gilbert Burns is next for ‘Borz’ with recent reports suggesting the duo could clash in January. ‘Durinho’ is coming off an impressive win over former title challenger Stephen Thompson has established himself as one of the top fighters in the division and would represent a huge step up in opposition for Chimaev.

Another, less likely option, is a fight with Leon Edwards. ‘Rocky’ was supposed to compete against Jorge Masvidal at UFC 269 but ‘Gamebred’ withdrew from the fight dueo to an undisclosed injury. Edwards seems content to sit out for a while longer rather than face a replacement opponent. Many expect the Englishman will get next crack at the welterweight title currently held by Usman.

Do you agree with Joe Rogan? Is Nate Diaz a good next opponent for Khamzat Chimaev?