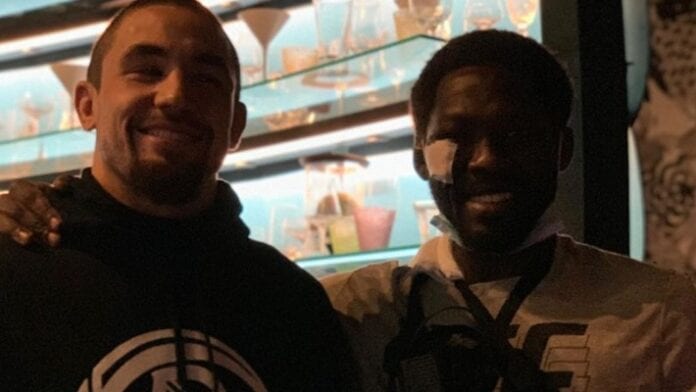 The pair fought in the co-main event of UFC 254 on Saturday in what was essentially a number one contender bout for the middleweight title.

Although it was pretty even for most of the fight, many felt Whittaker had the edge in the first two rounds. The result was all but sealed, however, once Whittaker rocked Cannonier with a head kick that later dropped him in the third round. Cannonier did well to survive until the final bell but was ultimately defeated via unanimous decision.

“The Killa Gorilla” took to social media on Sunday to release a statement where he thanked Whittaker for the fight while also revealing he broke or fractured his left arm during the fight. He notably posted an image of the two together.

“That didn’t go exactly how I wanted but My spirits remain high and I’m happy with how I fought all things considered. The very first kick he threw broke or fractured my left ulna 🦴 I couldn’t find my grove and adjust quickly to get the W so I’ll take my L with pride.

“@robwhittakermma certainly lived up to my expectations before and after the fight. Congrats mate. Enjoy Xmas and the new 👶🏽. It was a hell of an experience to be here. Can’t wait to go again.”

The defeat was Cannonier’s first since moving down to the middleweight division in 2018. However, with a 3-1 record in the division, the American could easily be back in title contention if he returns to the win column in his next fight.

Who do you think Cannonier should fight next?