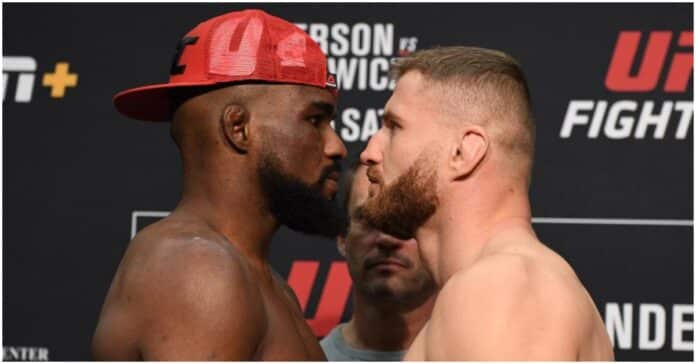 The UFC light heavyweight champion did not mince his words about his old rival.

On Saturday, after Corey Anderson knocked out Ryan Bader at Bellator 268, the conversation started about the best light heavyweight fighter.

Bellator President Scott Coker believes that the winner of the Bellator Light Heavyweight World Grand Prix Tournament between champion Vadim Nemkov vs. Anderson will be the best 205er in the world.

Anderson already believes he is, and him holding a win over UFC champion Jan Blachowicz and Glover Teixeira, who fight for the title next weekend at UFC 267, gives him some steam.

When Blachowicz got word about Anderson’s claim to being the best light heavyweight, he responded the following day.

Blachowicz knocked Corey Anderson out in their rematch at UFC Fight Night: Anderson vs. Blachowicz 2 in 2020. The fight was Anderson’s last fight in the UFC, and he would sign with Bellator six months later and has won all three of his fights by TKO.

On Wednesday, Blachowicz spoke with MMA Fighting and continued to rail on Anderson, calling him a coward for leaving the UFC.

“I just want to put him on the ground again. The difference between him and I is when I lost the fight, I don’t quit because I’m not a quitter,” Blachowicz told Ariel Helwani of MMA Fighting.

“He lost the fight, and he quit, he let it go. Maybe the pressure was too much, and he went to another place [Bellator]. Like I said, the second league. Now he is talking and barking; I don’t understand. Why doesn’t he stay in the UFC? He can say everything right now, you know, money. No, he is just a coward and a quitter.”

While the trilogy fight between Blachowicz and Anderson is out of the question, with the pair being in different promotions, the trash talk between them will not stop anytime soon.

Who would win the trilogy fight between Blachowicz and Anderson?