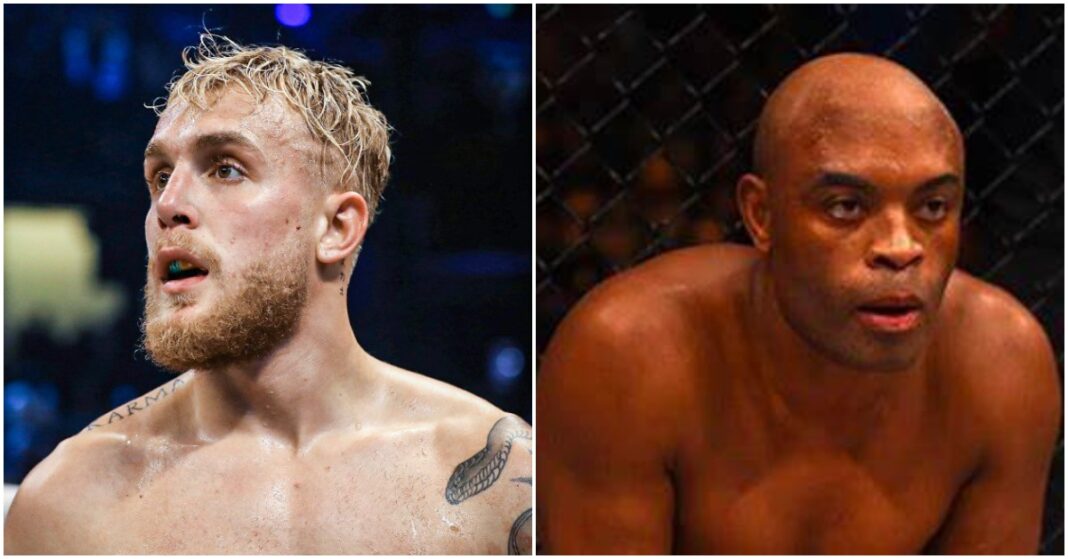 Jake Paul has been open to most challenges whilst competing in boxing and now it seems ‘The Problem Child’ would ‘definitely’ be interested in testing his skills against former UFC middleweight champion Anderson Silva.

Speaking on The MMA Hour Paul revealed his interest in taking on ‘The Spider’ who has earned himself a 2-0 record since stepping into the ring. Silva beat Julio Cesar Chavez Jr. via split decision before dismantling Tito Ortiz inside the first round of their bout.

“Yes, definitely, I would love that fight”

“Interesting story, I think he was the first celebrity I ever saw. Right when MMA was blowing up, my dad was a super big fan, and we went to this local MMA event, and they must have paid Anderson Silva to come because it was in Ohio so I don’t know why he would have been there.

“But I actually asked for his autograph, and we took a picture with him. I’m maybe like 12 years old but I think he was the first celebrity that I met. So, it would be fun to bring it back full circle and fight someone who was one of my first idols.”

Although Jake Paul has clearly expressed his desire to test himself against Anderson Silva, he also mentioned the name of Julio Cesar Chavez Jr as a potential opponent in the future but says excluding these two fighters the list of interesting matchups gets very short.

“There’s really no boxers who have a big enough name to make it an interesting enough event that are really near my weight class or experience level,” Paul said. “It would basically be like fighting for the world title would be the only fight that would sell and I don’t even know who the cruiserweight champion is.

“I think ‘Canelo’ (Alvarez) was supposed to fight (Ilunga Makabu) but it just doesn’t make any sense. It’s my sixth fight and this guy’s a world champion. So nobody really has a big enough name in the boxing world than maybe Chavez Jr.” (transcribed by MMAFighting.com)

Paul clearly is looking to further his boxing career as he continues to look for a fight, ‘The Problem Child’ was also in the news this week regarding MMA. After Paul mentioned an interest to step into the world of MMA, Eagle FC owner Khabib Nurmagomedov revealed the promotion has offered Jake Paul that exact opportunity under the Eagle FC banner. It’ll be interesting to Jake Paul’s next steps.

Does Jake Paul beat Anderson Silva in a boxing match?