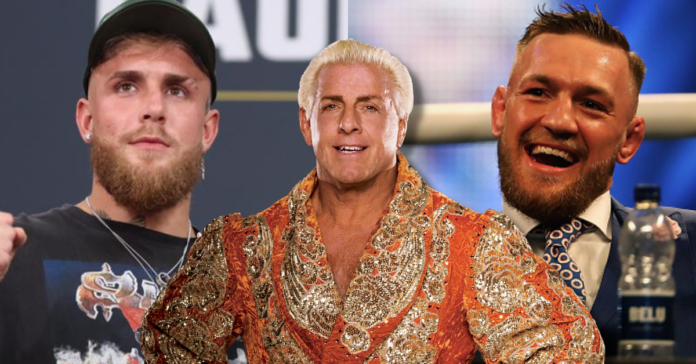 Ric Flair, the WWE Hall of Fame athlete, had some kind words to say about Logan and Jake Paul. Even going so as far as saying Jake Paul could ‘handle’ the Irish UFC fighter Conor McGregor in the boxing ring.

‘The Problem Child’ Jake Paul is now 6-0 in professional boxing after earning his most recent win against UFC legend Anderson Silva this past weekend. Additionally, he has wins over notable MMA fighters such as Tyron Woodley and Ben Askren.

On his ‘To Be The Man‘ podcast, the ‘Nature Boy’ discussed the potential for a Jake Paul vs Conor McGregor showdown. On this boxing matchups, Flair said:

“Conor I think he could handle. I don’t know about Canelo … Conor can’t use the wrestling skills, they can’t use the submissions. You know what I mean?”

Conor McGregor made history as the first fighter to hold two world titles simultaneously in the UFC. ‘The Notorious’ captured the featherweight and lightweight thrones in 2016. He also fought boxing great Floyd Mayweather in his final professional bout in 2017.

‘The Nature Boy’ added that Paul should avoid Mike Tyson. He continued:

“My only advice to Jake Paul would be, don’t call out Mike Tyson. [laughs] Anderson Silva, okay. I like Anderson, I know him personally. But I wouldn’t want to mess with Mike Tyson, I see Mike all the time. That might be more than he can chew.” [Transcript courtesy of ewrestlingnews]

After defeating Anderson Silva, it seems that it is likely that Jake Paul will be facing former UFC fighter, Nate Diaz. The two have begun trash-talking and reportedly had an altercation this past weekend.

Ric Flair also mentioned that he was impressed with Logan Paul’s brief stint in the WWE. Logan participated in a match at WrestleMania 37 in 2021. He made additional appearances at SummerSlam in 2022. It seems Logan Paul will be active in the WWE ring, which ‘The Nature Boy’ is happy about. He said:

Ric Flair is a legend of professional wrestling with a career spanning over fifty years. ‘The Nature Boy’ made his debut in 1972 and had his most match in 2022. He said he has no plans of retiring. See the full podcast with Ric Flair below: