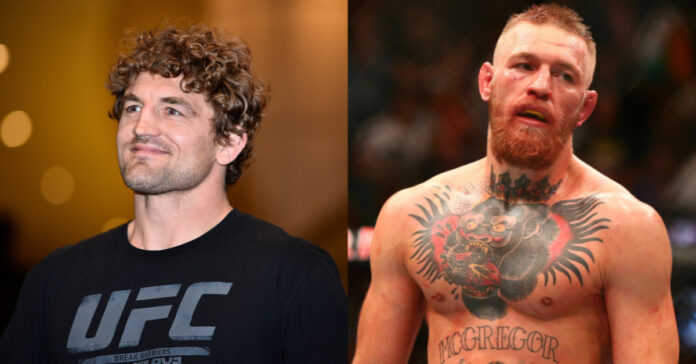 Ben Askren is fed up with former champion Conor McGregor and his antics on social media.

McGregor is known for calling people out just minutes after they win a life changing bout. Just this past week McGregor called out Islam Makhachev after his dominant win over Charles Oliveira at UFC 280 for the lightweight championship. McGregor hopped on Twitter and almost immediately fired off multiple tweets.

McGregor tweeted a few more as well, claiming that this wasn’t Khabib Nurmagomedov‘s “fathers plan”. McGregor also said that his style matches up perfectly against Makhachev’s and he believes he possesses the skillset to win a bout against him. These tweets were later deleted.

This isn’t the first time the two have had words, as Ben Askren told McGregor he should retire just a few weeks ago.

Askren claims he doesn’t ever talk bad about other fighters or call them out, because he isn’t fighting anymore, unless they offer him Jorge Masvidal.

“The only person I would say something about is Jorge [Masvidal] because I would fight Jorge if they were ever to offer me that. Besides that, whatever. I may have an opinion on their fight or an editorial on how the fight went but Conor comes in and says, I’ll beat him up no problem. Well, you wouldn’t do anything to him because you don’t actually fight.”

McGregor claims he will be making his return to the octagon “very soon”, but Dana White confirmed that he has not been in the USADA testing pool, putting him out until April at the earliest.