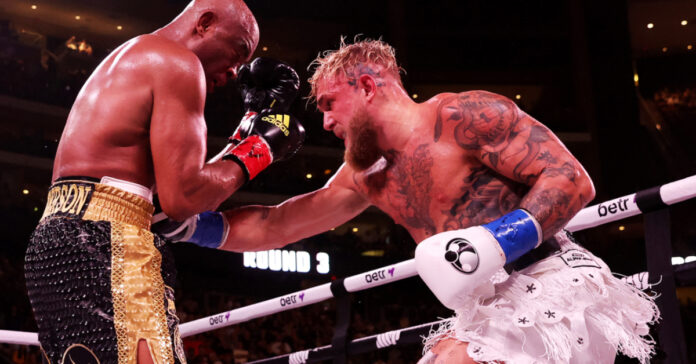 Tonight was a good night for fans of combat sports. Following Bellator 287, and then UFC Vegas 63, boxing returned to us for Jake Paul versus former UFC middleweight champion Anderson Silva.

Following an eight-round war between these two combatants, Jake Paul was awarded the unanimous decision victory, showcasing his endurance, skill, and grit throughout.

Ariel Helwani asked Jake Paul to give his thoughts on the biggest win of his career: “Man, it’s a surreal moment. Hard work pays off. First and foremost, I want to say thank you to Anderson. He was my idol growing up, he inspired me to be great. He was the first celebrity I ever met. Without him I wouldn’t have had a fight this year. He’s a tough mofo, for real.

“(He’s) A legend, I have nothing but respect for him.”

Helwani then asked Paul to explain the knockdown in round eight: “We were just fighting in the clinch and he got caught on the way out. He took so many hard shots throughout the whole fight. Dude’s a real dog because you see what happens to everyone else that gets hit with that shit. He’s the toughest guy in the world I swear to god.“

“I just wanted it more, I’m a real dog and I left it all in the ring.”

Paul finished his statement with the following: “I want Nate Diaz, who’s a bitch. He tried to come into my locker room, he tried to cause some shit. And then he always leaves the fucking arena. So, Nate Diaz, stop being a bitch and fight me.”

Paul came into the bout with a perfect record of 5-0 with four knockouts, having knocked out the only man to take him the distance in their immediate rematch. Three of those victories came over multi-time world MMA champions Ben Askren (Bellator & ONE) and Tyron Woodley (UFC).

Silva on the other hand came in with a professional record of 3-1, and he’s gone 3-0 since returning to the ring following his departure from the UFC, where he left going 1-7-1 in his last nine.

Who would you like to see Jake Paul face next?