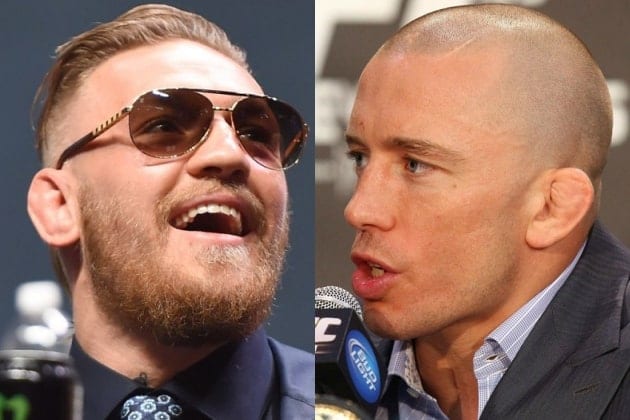 The MMA world was sent into a frenzy of speculation yesterday (Tues., August 30, 2015) when a report surfaced that longtime former UFC welterweight champion Georges St. Pierre would return to the Octagon to face featherweight champion Conor McGregor at November 12’s UFC 205 from Madison Square Garden, the promotion’s first major show in New York.

The news was supposedly set to break on this evening’s UFC Tonight, and that’s what transpired.

St. Pierre has long been rumored to finally be making a comeback to MMA after almost three years from the sport when he vacated his belt following a highly controversial split decision win over Johny Hendricks at UFC 167. Many issues blocked his rumored return, however, as PEDs and his lucrative sponsorship deal with Under Armor apparel stood in the way.

But with USADA doing everything in its power to clean up the sport in partnership with the UFC, the promotion must have also found a way to bypass the holdups with GSP’s sponsorship and their uniform deal with Reebok.

He’ll return to the Octagon to face McGregor in one, if not the, biggest fights of 2016 – and perhaps of all time. “”The Notorious” has of course been embroiled in a lengthy and heated rivalry with Nate Diaz throughout this year, and recent avenged his submission loss at March’s UFC 196 by winning a closely contested majority decision in the main event of August 20’s UFC 202.

McGregor was thought to have injured his ankle in the win over Diaz, and he drew a potential six-month suspension for the injury. With three months left until UFC 205, there should be ample time to get him cleared by a doctor, however. The Irish trash talker was linked to bouts with lightweight champion Eddie Alvarez and interim featherweight champion Jose Aldo, whom he knocked out to win the 145-pound belt last December.

The UFC went with the big money fight in this instance, and you can hardly blame them. St. Pierre has been out of action for eons in terms of MMA, and he also tore his ACL during the hiatus. But he also walks around at 190 pounds or more, making it a third straight fight against a bigger man for McGregor, who previously enjoyed a noticeable size advantage over his overmatched featherweight opponents.

McGregor has had significant trouble in the UFC has been on the ground, and St. Pierre is undoubtedly one of the finest wrestling and ground technicians on the face of the earth, even after his three-year break. Who is your pick to win this monumental showdown?