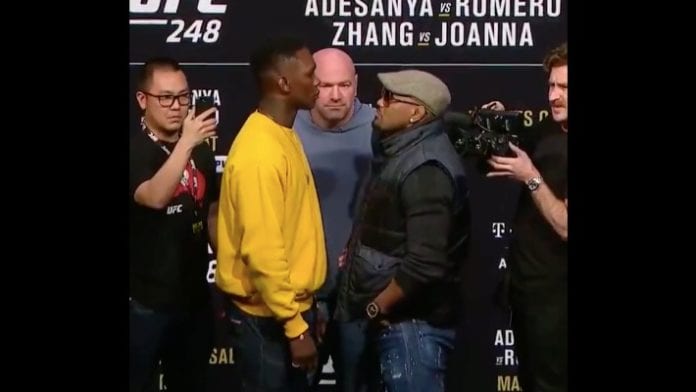 The pair will headline the UFC 248 pay-per-view (PPV) event from the T-Mobile Arena in Las Vegas, Nevada on March 7. Today, the UFC held a UFC 248 press conference, where both Adesanya and Romero fielded questions from the media. After, UFC president Dana White had Adesanya and Romero face off. The face-off actually resulted in a mini dance-off as well. Check it out below.

Adesanya’s fight with Romero will be the first title defense of the Nigerian-born champion’s career. He unified the 185-pound strap when he knocked out Robert Whittaker last year. He’ll take on Romero, a man who is on a two-fight losing streak. There has been a lot of controversy surrounding Romero receiving a title opportunity, a move Adesanya calls “charity work.”

However, “Stylebender” called Romero out after some chatter amongst the mixed martial arts (MMA) community suggesting that the Cuban has what it takes to finally down Adesanya. Romero was more than happy to answer the call. We’ll see whether or not that’s the case next month.

What do you think about Adesanya and Romero’s faceoff? Who are you picking in Adesanya vs. Romero?