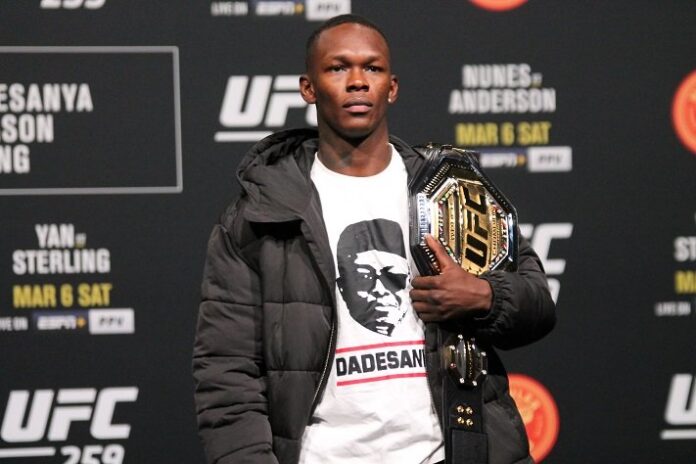 Israel Adesanya brushed off the criticism from last night’s main event despite being boo’d by the largely pro-Adesanya crowd.

At UFC 276, Adesanya (23-1) defended his middleweight crown against ‘The Killa Gorilla’ Jared Cannonier (15-6). Despite taking home the unanimous decision win (49–46, 49–46, 50–45), Israel Adesanya was met with boos from the crowd as he exited the arena. This prompted the middleweight champ to lash out in the post-fight media scrum.

“F—k em. F—k em,” he said. “They’ve all been here since 3PM, they’re all drunk. They don’t know what real fighting is or real finesse. Look, I’ve said this: the greats, they all get to this point. I’ve seen it when I was just a fan. Still a fan. Anderson Silva. GSP. I remember fights where I was like ‘That was a fantastic fight’ and people were just booing them. GSP. One of the GOATs. And people would just boo them. And I’m like what the f—k are you guys watching? You dumb f—ks.”

Prior to the fight, Adesanya had predicted a dominant win over Cannonier and even promised to finish the number one contender. Having increased the stakes, Adesanya failed to deliver on his promise, which is perhaps why the crowd felt let down and voiced their frustrations.

But Adesanya wasn’t too concerned about that.

“I fought tonight, I fought my ass off tonight,” he said. “I didn’t feel like I was chilling or waiting, I was pressing the action, I was going for it. I was touching him up. But like I said, I was critical because I couldn’t get my power stuff going. I couldn’t get the change-ups going. He was a formidable opponent. You can’t sleep on this guy cuz he’ll sleep you. And I’m not going to risk my health, risk my brain. I do that, but I’m not going to do it stupidly just for the entertainment of some gringos, some drunk folks.”

It’s a bad look when your ring entrance is more entertaining than the fight, in the eyes of the public. Israel Adesanya will have a chance to correct all wrongs as signs point to a title fight against his former kickboxing rival, Alex Pereira, who scored the biggest win of his career by knocking out Sean Strickland.