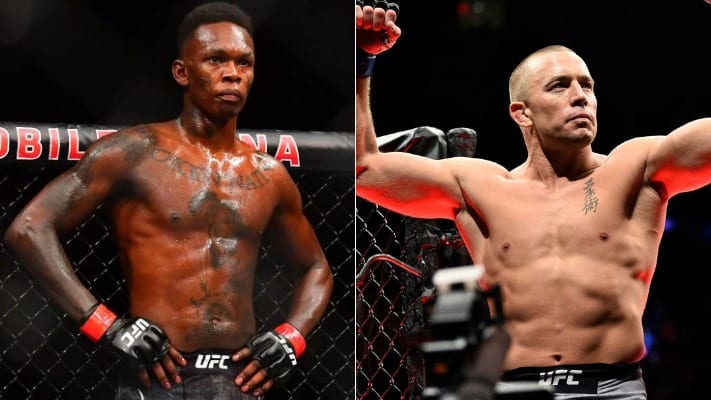 UFC middleweight champion Israel Adesanya has heard the praise the UFC Hall-of-Famer Georges St-Pierre has given him, and he’s letting him know it’s appreciated.

Following Adesanya’s second-round knockout of rival Paulo Costa at UFC 253, former UFC middleweight and welterweight champion Georges St-Pierre gave an interview with ESPN’s Marc Raimondi, where he called Adesanya “a perfect fighter,” and noted that, “our job is to entertain the audience, and he’s doing it very, very well.”

In response, Adesanya had this to say about the legendary fighter (H/T MMA Junkie):

“GOATs recognize GOATs… Bless you, Monsieur St-Pierre. Merci beaucoup. Thank you very much. I appreciate that. That’s a beautiful compliment coming from a GOAT, because GOATs recognize GOATS. Honestly, it’s beautiful hearing that from him, from a guy who I’ve watched for years and I was a fan of.

“Don’t get me wrong, Silva was my guy. Artistry, this is martial arts. St-Pierre held himself to a certain code like no other, same as Anderson. But yeah, it’s beautiful. It’s cool that someone like that can be – not that I needed it, but it’s nice. It feels good to be recognized by a great like that, so salut monsieur, St-Pierre.”

The undefeated Adesanya has yet to be booked for his next title defense, but it is widely believed that he will face the winner of Robert Whitaker vs Jared Cannonier, who square off in the co-main event of UFC 254 later this month in Abu Dhabi.

What do you think? Is Israel Adesanya a “perfect fighter””? Let us know in the comments.