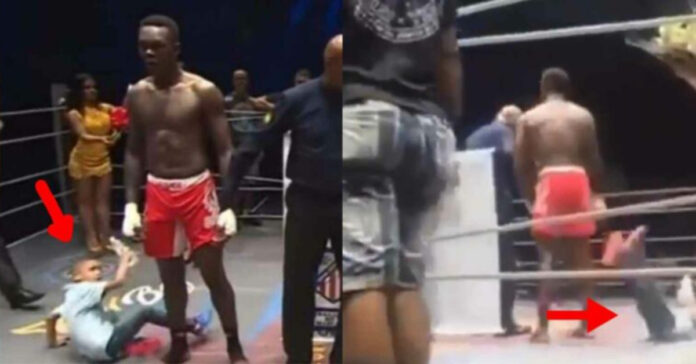 Ahead of this weekend’s blockbuster undisputed middleweight title fight between UFC champion, Israel Adesanya and his kickboxing rival, Alex Pereira at UFC 281 in New York City – footage has resurfaced showing the latter’s son mocking Adesanya’s KO loss against his father under the GLORY Kickboxing banner back in 2017.

Attempting to secure his sixth title knockback at UFC 281 this weekend in Madison Square Garden, Adesanya meets the 6-1 mixed martial artist, Pereira – who holds two victories over the former during their respective kickboxing careers.

Nabbing a dubious decision win over City Kickboxing ace, Adesanya back in 2016, Pereira would then find himself rallying in a rematch the following year in his native Brazil – stopping Adesanya with a brutal left hook KO. The knockout came as the first and still only knockout defeat of the middleweight champion’s combat sports career.

With the Nigerian-Kiwi’s title defense against Sao Paulo striker, Pereira fraught with promotion of their distinct rivalry, footage has reemerged detailing Pereira’s young son celebrating his father’s 2017 win over Israel Adesanya – by recreating the finish, acting as Adesanya and collapsing to the ring canvas.

Sharing his thoughts on Pereira’s son mocking is knockout loss, Adesanya questioned how he should have reacted to the troll attempt, apart from simply laughing.

“I think so, yeah,” Israel Adesanya replied when asked if Alex Pereira’s son mocked him back in 2017 during an appearance on The MMA Hour with Ariel Helwani. “I remember it, but I kinda looked at him and laughed. He did it multiple times but I just looked at him and laughed. What am I going to do, stomp his head? It doesn’t bother me if he’s there [at UFC 281] – I hope he’s older now.”

Earning his middleweight title fight just three outings deep into his Octagon tenure, Pereira turned in a stunning first round knockout win over Sean Strickland at UFC 276 back in July during International Fight Week.