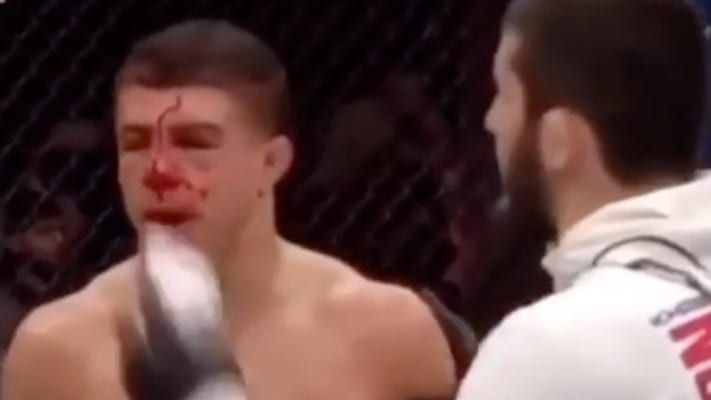 Makhachev has been looking for an opponent to fight at UFC 249 which takes place on April 18 in Brooklyn, New York. He was initially looking to compete against Kevin Lee only for the latter to claim that the UFC wanted that fight later in the year in Russia.

With other contenders such as Dan Hooker and Paul Felder booked to face each other, recent rumors suggested that Makhachev would face Gregor Gillespie next. However, nothing has come to fruition as of yet.

And so, Makhachev decided to call out Iaquinta who was more than receptive to the idea. However, the New Yorker wants the fight in Moscow.

While it is a relief for Makhachev that he finally found an opponent willing to face him, he still wants to compete in April in New York.

And he followed things up on Instagram with a tongue-in-cheek video of him wiping the blood off Iaquinta’s face following his defeat to Khabib Nurmagomedov back in April 2018 which happened in the same arena:

“I want to take care of you like I did last time at Barclays center. I’m waiting for your answer #ufc249“

Makhachev last competed at UFC 242 in September when he outpointed Davi Ramos.

What do you think of Makhachev’s video?