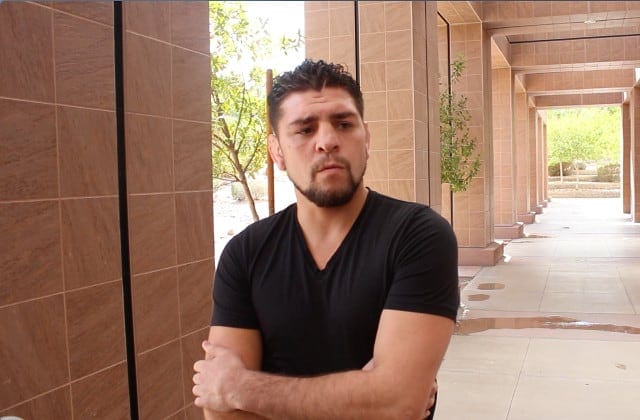 PED’s (Performance Enhancing Drugs) have become a hot topic once again in the world of mixed martial arts, but this time there is a changing of tides in the subject. Marijuana and more specifically Nick Diaz’s use of has been shoved in to the limelight this week, with his September 14 hearing winding up with a rather unsavoury resolution. Five years no fighting and a $165,000 fine was the decision passed down by the NAC (Nevada Athletic Commission) to Diaz, and it’s been met with both outrage and disbelief.

Firstly, many believe that Diaz’s well presented case was enough to cause doubt in the legitimacy of his positive result following UFC 183. Then there’s the fact that Anderson Silva, Diaz’s UFC 183 opponent, failed a drug test for anabolic steroids and banned anti-anxiety and sleeping pills. ‘The Spider‘ was given a one year ban for his infraction, and lastly there’s the subject of Diaz’s failed drug test; Marijuana, and it’s place on the WADA (World Anti Doping Agency) prohibited list.

Many argue that a drug that is naturally occurring, non-anabolic in form and essentially a relaxant is not exactly performance enhancing. There are also people that believe the essence of Marijuana use, in terms of muscle relaxation, could aid rest and therefore be a performance enhancer, although in possibly the most minute form.

“Firstly, with respect to marijuana, it’s inclusion on the WADA prohibited list is controversial. On so many occasions the question about its impact on performance has been questioned. A substance is added to the list if it meets 2 of 3 criteria:

“Marijuana is regarded as meeting at least the last two criteria.  This is a possibility for some sports, in relaxing an athlete and improving their capacity to perform dangerous/tense tasks (ski jumping, darts, motor racing, shooting), often with potential to cause danger to others. Due to objection, WADA actually revised its approach during 2013 and raised the laboratory reporting level from 15ng/ml to 150 ng/ml, thereby picking up only ‘on the day of testing’ use. Testing of marijuana is likewise focussed on competition time tests. So the argument that an athlete under the influence of marijuana might endanger others could be applied,  and that testing protects other participants if it is discovered or dissuades its use.”

So there is obvious argument for both sides of the case once again, but what of the hefty five year sit for Diaz? Surely with Silva only receiving a one year ban, and Jon Jones pretty much walking away from being busted for cocaine, there’s ample grounds for a complaint by Diaz’s team? Rather opposite argues Verroken:

“The sanction is rather severe. I can only presume that the athlete’s previous doping history is what led the decision to penalise beyond the usual WADA Code sanction for marijuana. One might say that the NSAC has been lenient as WADA Code sanctions for a third offence would always be a life ban unless elimination or reduction clauses applied (no fault or negligence). If this reduction applied it would be 8 years.”

As we continue down the windy road of being fans of MMA, the UFC is blazing trails in all aspects. The biggest fighters, the new WADA drug testing partnership and many more factors, should they be taking a stance against such draconian sentences for puffing ‘the herb’? Dana White states he ‘has no say in the matter’, but I beg to differ; the biggest MMA promotion on the planet, when partnered with WADA, can pretty much have a say in anything.

This isn’t anything new though, as you’ll remember Matt Riddle was fired by the UFC for failing a dope test with Cannabis in his system, and clearly it was much easier for the promotion to can him than a needle mover like Diaz. I digress, take a look at MMA Digest’s round up of angry fighters reacting to Diaz’s NAC hearing:

So we have a professional opinion, we all have our own points of view on the matter, but at the end of it you can’t argue with what’s written on the WADA list, well maybe you can. Nick Diaz‘s petition that seems to be gathering steam, as well as his legal team’s plan to appeal the somewhat outrageous decision could lead to big changes. That is, if it all comes off.

In closing, my own view; If it was my choice, I would have lent towards a more monetary based punishment for Diaz, simply to make an example of him breaking the rules three times. In terms of Marijuana being a PED? I don’t think so really, there are many other legal way to achieve the same degree of muscle relaxation as partaking in a Dutchy, holistic therapy and a hot bath for instance, and the guy fought Silva on the juice for crying out loud!

Check out this video of Joe Rogan and Eddie Bravo discussing Mary Jane in MMA, and thanks for reading!  You can find out more about CBD and its effects, check out American Marijuana.