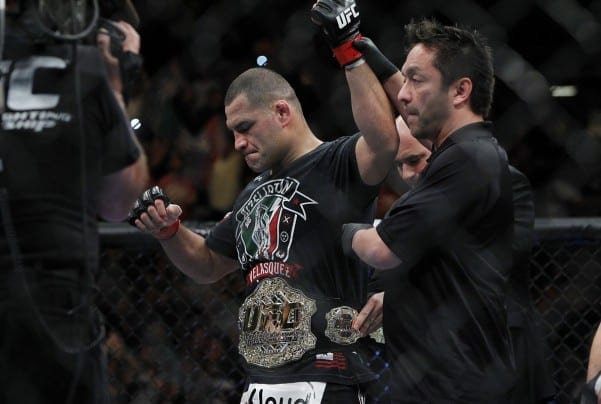 This weekend (Sat., June 13, 2015) heavyweight champion Cain Velasquez will finally return to the cage after nearly two years off due to shoulder and knee injuries to face interim champ Fabricio Werdum in a title unification bout in the main event of UFC 188 from the Arena Mexico in Mexico City.

He’s been out for so long that it’s hard to remember his pure brilliance when he’s actually able to make it to the cage. But when he does, there’s no denying that the champ brings an almost-perfect mix of technical striking precision, power, wrestling chops, and a smothering ground game to make him nigh-impossible to beat inside the Octagon.

Velasquez has had an illustrious run in the UFC otherwise, dispatching several of the world’s top heavyweights with relative ease during his rise and reign at the top. Heading into his long overdue title defense at UFC 188, let’s take a look back at Velasquez’ greatest wins. 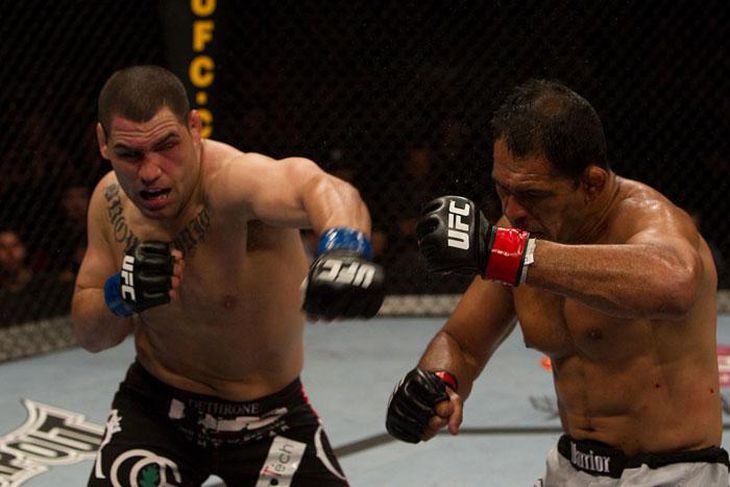 This fight that propelled Velasquez to his UFC title shot signified a shocking change of the guard in the UFC, as longtime former Pride champion ‘Big Nog’ was well known for having an iron chin during his run at the top. Velasquez proved that his new breed of UFC heavyweight was far too evolved and well rounded for the aging Nogueira, destroying ‘Minotauro’ with a picturesque combo and some follow-up punches in the first round to earn a much deserved shot at gold.

With ‘Bigfoot’ already having a loss to Velasquez and two somewhat fluky wins to get back into title contention, this fight may not have been the most legitimate title fight to book at the time, but it happened. The result was not unexpected; as Velasquez floored Silva with a jab-overhand/straight right combo that quickly led to another stoppage win. It wasn’t the quality of opposition that made this a signature win; it was the fashion in which he got it done. Like his win over Nogueira, this stoppage on the grand stage showed just how lethally accurate and powerful Velasquez truly was and is.

Velasquez’ latest win came in another absolutely brutal five-round destruction of dos Santos; this time with it being mercifully stopped in the fifth round. There’s not much else to say about this bout other than it showed the sheer power and force of Velasquez, proving beyond any shadow of a doubt that he was the most dominant heavyweight (and MMA fighter) on the face of the Earth. A violent bludgeoning that was at times hard to watch.

Velasquez’ first win over dos Santos ranks above his second because it was the fight where he regained his belt after a disheartening first round knockout loss at UFC on FOX 1. He came in beyond motivated to show it was a fluke, and he did just that by dominating dos Santos with an unstoppable mix of takedowns and vicious striking skill. Somehow dos Santos survived to the final bell, but he was never in this fight. Against the clear second-best heavyweight in the world, Velasquez left no question about who the ‘Baddest Man in the World’ was that night, and he’s kept that title until this day.

No other fight could possibly top this list other than Velasquez’ title clinching win over former champ Brock Lesnar at UFC 121. The American Kickboxing Academy (AKA) standout proved that Lesnar couldn’t hang with him, battering ‘The Beast’ with an endless flurry of pinpoint shots that resulted in Lesnar spinning around and becoming the brunt of many a hilarious MMA meme. But more importantly, it signaled the official beginning of truly a new era for the heavyweight division, one where Velasquez has ruled over aside from his brief setback against dos Santos. The fight, which was dubbed 2010’s ‘Knockout of the Year’ by many, is simply a classic and will forever go down in MMA history.