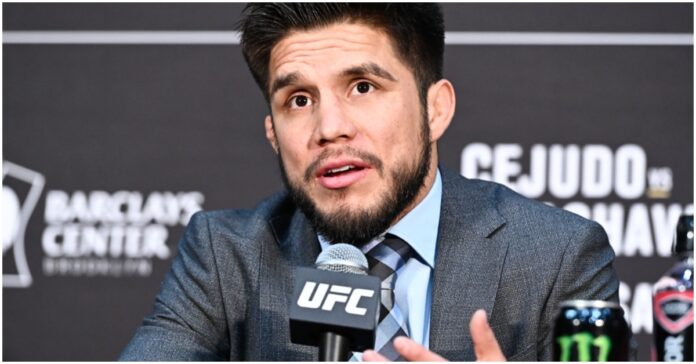 Henry Cejudo has thrown his hat in the ring for a potential fight against Alexander Volkanovski at UFC 271.

Cejudo has been talking about moving up to get a third belt in the UFC. ‘Triple C’ immediately put his name out there for Dana White to consider. Volkanovski was supposed to take on Max Holloway for the third time, but ‘Blessed’ had to pull out a couple days after accepting the fight.

Cejudo took to Twitter to have his name considered for the title shot.

Alexander Volkanovski has a few fighters to choose from. The Korean Zombie seems to be the front runner at the moment, but even Yair Rodriguez has offered himself up for a fight. This will be Volkanovski’s third featherweight title defense. He recently successfully defended his title against Brian Ortega, where he won via unanimous decision. He is currently undefeated inside the UFC and has a record of 23-1.

Cejudo is one of the most decorated MMA fighters in the history of the sport. Cejudo is one few fighters that have held two championships in two divisions. He won the flyweight title as well when he beat Demetrious Johnson via split decision. He has one of the best resumes in the sport, as he also bested Tj Dillashaw when he dropped down to try to take out the flyweight division all together.

Cejudo would be a great matchup against Volkanovski, as he would be the most well rounded fighter ‘Volk’ has fought. unfortunately, Cejudo is not in the USADA testing pool at the moment, as this may be hinging him from being able to fight in the UFC.

Would you want to see Alexander Volkanovski face off against Henry Cejudo for the featherweight title?