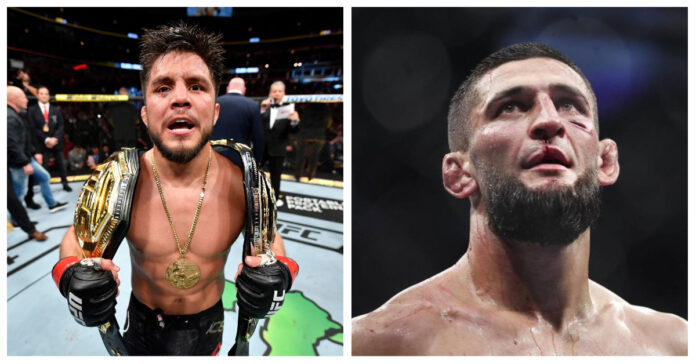 ‘Triple C,’ Henry Cejudo backs Colby Covington against Khamzat Chimaev if the fight is a 5-round affair.

The former 2 division champ, Henry Cejudo has successfully made the transition as a coach and analyst since retiring from competition. Now, as the rumors of Covington vs Chimaev circulate, Cejudo believes that if the fight is 5 rounds, it will favor Covington rather than Chimaev, which is why he’s backing Chaos.

This is what Cejudo had to say in his recent YouTube video.

“I’ve been looking forward to this fight with him and Khamzat Chimaev, I think he’s the more experienced fighter. I think he’s wrestled a lot longer than Khamzat Chimaev. I think this is going to be a good fight. I think it’s going to come down to who’s recovered faster and quicker. And if this is a five-round fight, man, I almost want to lean towards Colby Covington, because as we saw in that Gilbert Burns fight with Khamzat Chimaev, I’m not sure if Chimaev could ever make 170 pounds.” (H/T BloodyElbow)

Most recently, Chimaev made news for his horrible weight miss against Nathan Diaz, causing a last-minute card shuffle where Chimaev faced Kevin Holland in a catch-weight bout instead. Although Chimaev made short work of Holland, Henry Cejudo believes that the weight miss showed that Chimaev can’t make 170 or if he does, his cardio will be severely compromised.

“When you’re eight pounds over against a superstar like Nate Diaz and you don’t make the weight, there’s two options. One, you’re too big, or two, you’re scared. I don’t know which one it was, but if he could make the weight, my question is will Khamzat actually recover with the gas tank of this guy [Covington] that’s accustomed to making 170 pounds periodically.”

It’s this gas tank issue that has Henry Cejudo siding with the former number-one contender in Colby Covington. Covington has made a career out of putting a pace on his opponents that eventually breaks them and Henry Cejudo thinks the same thing might happen in a 5-round fight against Chimaev.