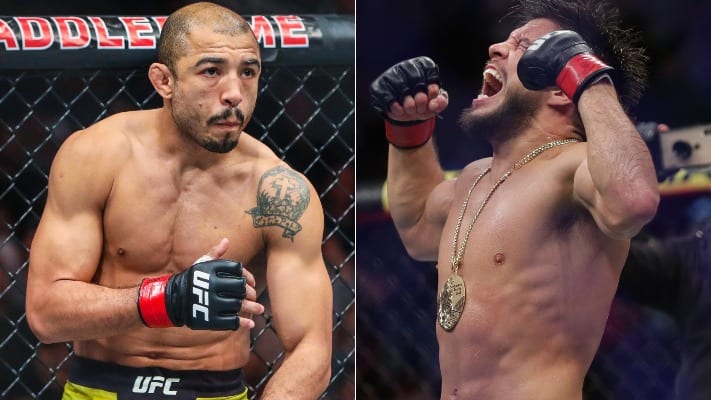 All the pieces seem to be in motion for Henry Cejudo to fight Jose Aldo next. Over the weekend, Aldo made his debut at 135 pounds, suffering a decision loss to Marlon Moraes on the UFC 245 pay-per-view (PPV) card.

However, many fans believe the judges got the decision wrong, and say Aldo truly won the bout. The same can be said for Cejudo, who UFC president Dana White claims texted him and said he wants to fight Aldo next. White sounded very intrigued by the matchup, and now Cejudo is publicly calling for it.

Taking to Twitter, Cejudo posted a video of himself calling Aldo out for a showdown in Aldo’s own backyard of Rio De Janeiro, Brazil. However, Cejudo claims he himself is the King Of Rio, and wants to defend his title in “my city.”

“It feels good to have good hair,” Cejudo said. “So upon my return, I really did want to fight Dominique Cruz. But I thought about it, and he’s too brittle. If I was to tell Dominick Cruz to bend the knee, he’d pop his damn neck out! But, actually, I’m not here to talk about Dominick. I’m here to talk about Jose Waldo. I want to give him a clap at his last performance, because a lot of people thought he won.

“I want to congratulate him because now he’s part of the Henry Cejudo sweepstakes – but it is under my terms. I want to fight him in my city, Rio de Janeiro, daddy’s coming home. Dana White let’s sign that contract. Ah, and one last thing, your movie sucks.”

Cejudo has not fought since June when he defeated Marlon Moraes at UFC 238 to capture the vacant bantamweight championship. After undergoing shoulder surgery, Cejudo is preparing for an early 2020 return to action. A title defense against Aldo would certainly be a massive way to get back to work and continue his title reign.

What do you think about Cejudo calling out Aldo for a Rio De Janeiro bout?