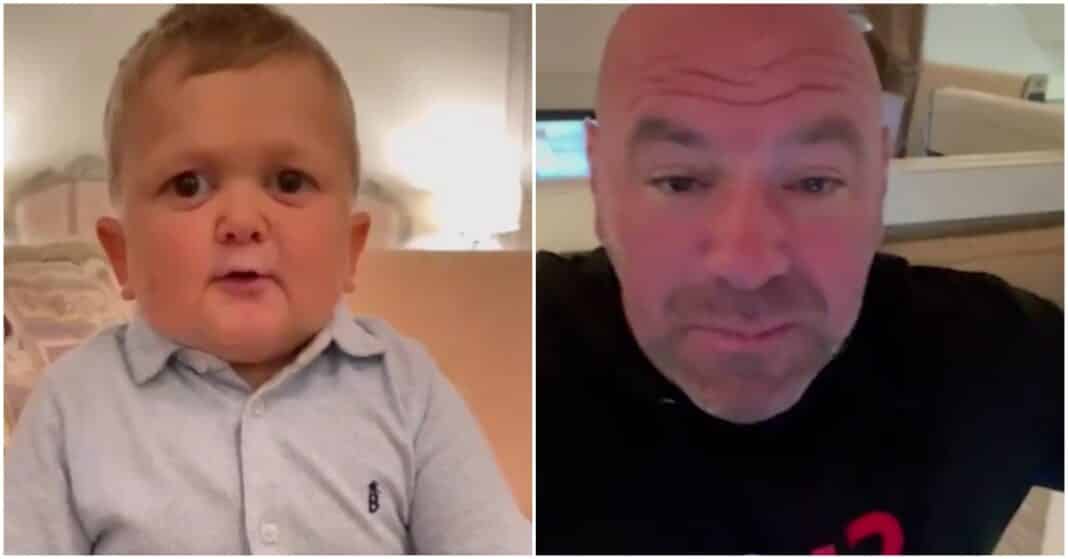 Internet sensation Hasbulla Magomedov has sent a video message to Dana White ahead of his appearance at UFC 267.

‘Mini Khabib’ is expected to be in attendance in Abu Dhabi to support his countryman and friend Islam Makhachev who squares off against Dan Hooker on the card.

The viral sensation has childlike characteristics such as stunted growth and a high voice which is believed to be caused by a form of dwarfism. Hasbulla has become a social media celebrity off the back of a mock press conference ahead of his proposed fight with Abdu Rozik.

Hasbulla Gets Into It With Dan Hooker

Earlier this week, Hooker jokingly reacted to Hasbulla being in his opponents’ corner at UFC 267.

The New Zealander said he would now be backing Rozik if/when he takes on Hasbulla.

“Abdu [Rozik] is on my team,” Hooker joked. “I’ve got a horse in the race now. I’m training my boy, Abdu… I’m not even sh*tting. Abdu is on my team, Hasbulla [Magomedov] can be on his [Islam Makhachev’s] team. He’s picked his horse. He picked the losing horse. Game on, baby.“

“Dan Hooker — listen to me, my brother. I smash you. Be careful,” Hasbulla replied.

Since then, the youngster has sent a direct video message to the UFC president to officially announce he will be in attendance this weekend.

“Hasbulla, I’m on the plane. I’m on Etihad right now, on my way to Abu Dhabi,” White replied. “I cannot wait for our meeting and I cannot wait to see you.”

What do you think Hasbulla and Dana White will discuss during their meeting?