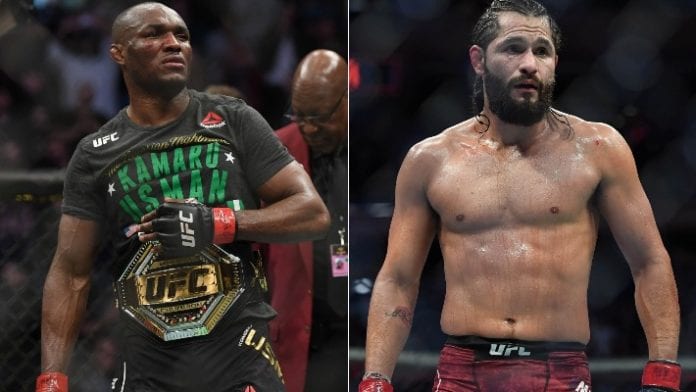 Usman will headline the upcoming pay-per-view event taking place April 24 in Jacksonville, Florida, against Jorge Masvidal in what will be a rematch of their welterweight title fight last year.

It will also notably be the first UFC event that will feature fans in full attendance ever since the pandemic shut down majority of the world last year.

With two other title fights on show, the UFC is certainly going big with this event — especially with Masvidal being the biggest star taking part on the night.

Not according to Usman, however.

“You can’t say you’re the star and that’s who I want to beat,” Usman told ESPN (via Middle Easy). “That’s wrong because I have what everybody wants. So you can’t say that. Of course, does he bring more eyes right now? Absolutely. If I look at all the pools of guys, I’ve been through all of them and now I’m just lapping them all. If we’re running a race right now, I’m lapping everybody right now, and he’s the first guy. So he’s dead last right now, and the first guy that I’m going to lap. I’m lapping him.

“Does he bring a little bit more eyes? Absolutely, I don’t take that away from him. I’m proud of him for everything that he’s done, absolutely proud of him, and respect in that aspect. But let’s be honest, I have what everybody wants. It’s green panty night when you fight me. He’s not getting the pay-per-views and stuff like that on his own, he has to fight me.”

Usman certainly brings up a good point as we haven’t seen Masvidal’s pulling power when he isn’t headlining against the champion or another mainstream star in Nate Diaz.

That said, his star can only rise if he goes on to defeat Usman and become welterweight champion.

Do you agree with Usman?