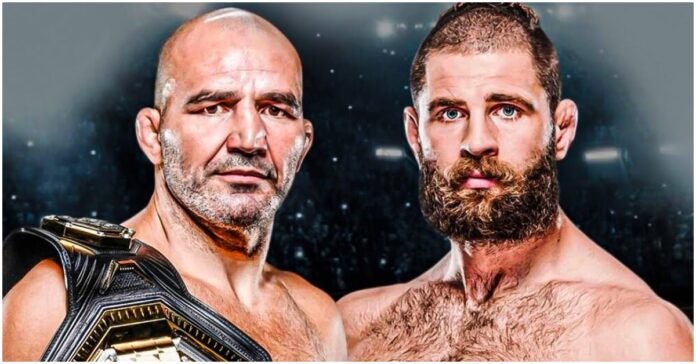 The upcoming headline fight of UFC 275 features a light heavyweight title fight between veteran champion Glover Teixeira and rising Czech KO artist Jiri Prochazka. The fight promises to be an action-packed striking affair, with both men possessing their own individual routes to victory.

Jiri Prochazka goes into this fight as the bookie’s favourite to win, but Glover Teixeira has built a career on defying the odds. Who will pick up the win in front of a sold-out crowd in Singapore? Let’s see what the LowKickMMA staff have to say:

Whilst Glover Texeira’s late-career resurgence to claim the 205lb title was one of the best stories in MMA over the past few years. However, one can only continue to subvert expectations for so long in the world of combat sports.

Jiri Prochazka may well be one of the most athletically gifted fighters to have ever competed inside the UFC. The combination of speed and power that the Czech samurai possesses is entirely unprecedented.

Whilst Teixeira’s ground game could serve as the great equalizer in this fight, I can’t look past the raw power of Jiri Prochazka. I believe we will hear “and new” after less than three rounds of pure violence, courtesy of ‘Denisa.’

Glover Teixeira vs. Jiri Prochazka The current run of veteran Minas Gerais native, Glover Teixeira is nothing really short of a fairytale. The undisputed light heavyweight champion has continually survived worrisome moments en route to taking the belt from Jan Blachowicz last October, however, amongst this current travel, I believe Czech challenger, Jiri Prochazka presents the most intriguing, and unorthodox matchup for him at 205lbs.

A shrewd grappler with fantastic top control and smothering ability – on display in notable victories opposite both Anthony Smith and Thiago Santos, Teixeira managed to mount the back of Blachowicz, and his wrestling and grappling ability seem to be one of the most interesting factors of this pairing – given the still unknown aspect of Prochazka’s ability to defend both.

The sticking point does come, however, if Teixeira can manage to land Prochazka in a position of danger himself – without absorbing something quite significant from the former Rizin FF champion, with Volkan Oezdemir and Dominick Reyes failing to avoid catastrophic knockouts. Personally, Prochazka gets my nod to defeat Teixeira and land a UFC title at the first time of asking – damaging the Brazilian beyond continue. Keep a close eye on potential grappling scenarios, however.

I see Prochazka going for the jumping knee but I’m sure Teixeira will be aware of the possibility and will deal accordingly. If you’re Glover Teixeira, you’d want to look at Prochazka’s fight against Brandon Halsey. Prochazka got taken down and was deep in a guillotine but refused to give up. And that was knowing there are about 8 mins left on the clock as this was under Rizin.

I’m going to take it a step further and say Jiri Prochazka has a 100% Finish rate at Light Heavyweight, which is a fact. His only decision win was against a heavyweight in an open weight contest. If we depend on the data we have available, I don’t see any reason why this fight would be any different, except Glover Teixeira who also has a similar ability to win.

Prediction: Jiri Prochazka by KO/TKO in the 2nd round.

The main event of UFC 275 features a time-tested tale of age vs. wisdom. Glover Teixeira asserted his greatness by defeating the seemingly unbeatable Jan Blachowicz, and he made it look easy. On the other side stands Jiri Prochazka. Part myth, part mystique. Will the young prospect find his shine, or does Teixeira prove that all along he was deserving of his current throne? On one side you see that Teixeira gets hit a lot, but on the other hand, you can say he has a chin of steel. A guy like Prochazka will test that, and even push the Brazilian’s chin to its limits.

But in that same aspect, Teixeira will test the grappling of Prochazka, in addition to presenting an interesting enigma on the feet. While Prochazka looks like the next legend in MMA, you could say he’s not ready to face a man with the number of tools as Glover Teixeira.

Prochazka has a speed advantage on the feet and both have knockout power. Where Teixeira excels is on the ground. I think Teixeira gets it to the ground and stops Prochazka with ground and pound.