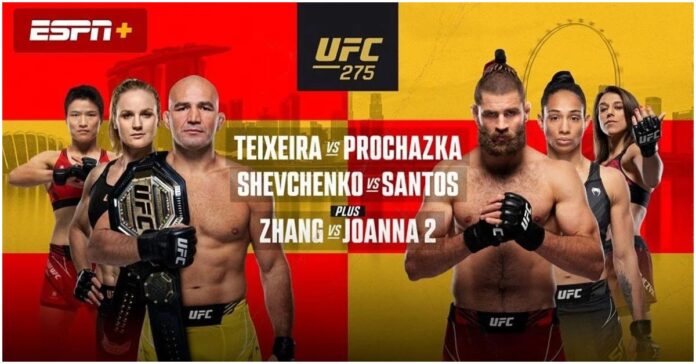 UFC 275 is a stacked event full of elite talent featuring two title fights and a rematch of one of the greatest five round bouts of all time. Glover Teixeira makes his first 205lb title defense, taking on Czech knockout artist in the main event. Valentina Shevchenko will see to defend her flyweight title yet again as she takes on surging contender Taila Santos. In the co-co main event, former champs Zhang Weili and Joanna Jędrzejczyk run back the all-time great bout they both featured in two years ago.

Also featured on UFC 275 are a number of fan favorites such as Jack Della Madellana, Andre Fialho, Jake Matthews, and Brendan Allen.

Join LowKickMMA as we preview, predict, and hopefully win some money betting on UFC 275.

Glover Teixeira has made an entire career of constantly defying expectations, culminating in him claiming the UFC light heavyweight title at the age of 41. However, as with every fighter, there will come a time when Teixeira is unable to continue competing at the very pinnacle of his weight class, and unfortunately, Jiri Prochazka is exactly the kind of physical specimen that could make this point abundantly clear.

Prochazka is one of those individuals who is as close to unique as you can get in the fight game, both in terms of the mental and physical side of things. The surging Czech samurai is monstrously strong and fast, with unorthodox striking that saw both Volkan Oezdemir and Dominick Reyes left unconscious on the canvas.

It is worth noting that Teixeria may be able to shift the tide of this fight if he can take Prochazka down. But we will be backing ‘Denisa’ to be victorious at UFC 275, winning this fight via KO/TKO. Betway has the prop priced at 1.72.

The first fight between these two elite strawweight’s was one of the best fights to have ever taken place inside the UFC octagon. Whilst it is often the case that rematches of great fights don’t live up to expectations, the style clash of Weili and Joanna just makes it appear inevitable that this will be another war for the ages.

One of the factors that made the first fight so thrilling was just how close it was. Weili Zhang ultimately left with her hand raised, but there is a very strong case to be made that Joanna deserved the nod. Since that first fight, Zhang lost back-to-back title fights with Rose Namajuans, whilst Joanna has not competed at all.

Inactivity can have disastrous consequences in MMA, but it truly is subjective to each individual fighter. It could also be argued that the physiological toll of losing two fights on the run, both in very different ways, could tale an equally detrimental psychological toll.

This fight will be incredibly close, to the point where it is near impossible to make a clear case for one fighter or the other. However, the bookies have Zhang as a decent favorite for this UFC 275 rematch, with Joanna’s underdog line placed at 2.50. This is the value play, and if you want action on this fight, this is the line to back. If you wanted even better odds, you could also take Joanna by decision, as that seems her most likely route to victory.

Portugal’s Andre Fialho has made a name for himself in the UFC over the past few months by being a heavy-handed knockout artist who fights extremely regularly. A short-notice UFC debut saw him come up against the dynamic Michel Pereira, and whilst Fialho did come up short, he took Pereira to the judge’s scorecards in what was an extremely entertaining bout. Since then, Fialho knocked out both Miguel Baeza and Cameron VanCamp.

However, the big difference between these past three opponents of Fialho, and his upcoming opponent at UFC 275, Jake Matthews, is the wrestling. Fialho’s boxing-heavy style relies on his opponents being willing to exchange with him. Matthews will be perfectly happy to grind out the majority of a round in half guard, racking up points and frustrating Fialho.

Matthews opened as a surprisingly heavy underdog, but the line is getting closer at fight night approaches. At the time of writing, his ML is priced at 2.20 on Betway.