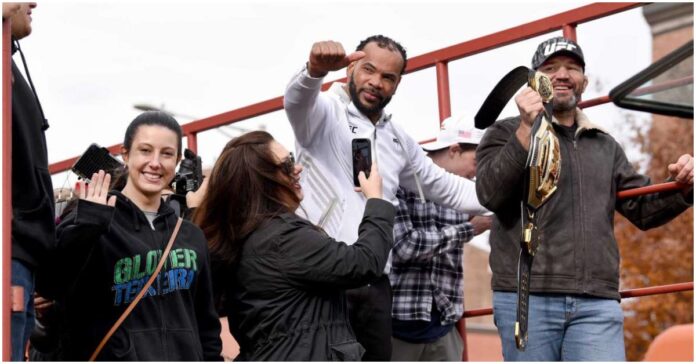 Glover Teixeira has been awarded a key to the city, as well as being given a parade around his hometown of Danbury, following on from his impressive victory over Jan Blachowicz at UFC 267.

Teixeira was able to secure the light heavyweight championship following his submission victory last month, returning to his hometown he and his fellow residents took time to appreciate his achievement.

The Brazilian who owns Teixeira MMA and Fitness, a gym located within Danbury took a moment during his acceptance speech to say thank you to everyone who has supported him.

“I’m just so happy this is happening over here, I come to Danbury in 1999 and people just warm hearts over here, just opened their arms for me. It’s the land of opportunity. I had a dream in Brazil to be a professional athlete. Most of the people, I have a lot of people from my town here, they know how hard it is over there.

“I couldn’t train, I couldn’t do anything, and I come here, and I say, ‘This is the land of opportunity, I want to be a world champion. Greg Davis is one of my guys there that trained with me. He was there when I say — I couldn’t speak much English, he asked me, ‘Why are you training in jiu-jitsu for?’ I said, ‘I want to be UFC champion.’” (Transcribed by MMA Fighting)

Those MMA fans who have followed his career will know just how impressive what he has done is, at the age of 42. Teixeira held an eight-fight winning streak when he challenged Jon Jones for the belt back in 2014. Although he was unsuccessful in his attempt and would go on to trade wins and losses up until the start of 2019, Teixeira wasn’t to be put off.

The Brazilian started his hot streak with a first-round submission win over Karl Roberson in January 2019. He would follow this up with Rear Naked Choke victory over Ion Cutelaba, earning himself a performance bonus. He would then edge out a split decision victory over Nikita Krylov before returning to the bonus column with his TKO win over Anthony Smith. Teixeira would then submit Thiago Santos extending his winning streak to five before fulfilling his lifelong dream by dethroning then Light Heavyweight Champion Jan Blachowicz.

At 42 years old who knows how long Glover Teixeira’s will be able to maintain his time at the top with many fans speculating his first defence will come against Jiri Prochazka.

How does Glover Teixeira match up against the number one contender?