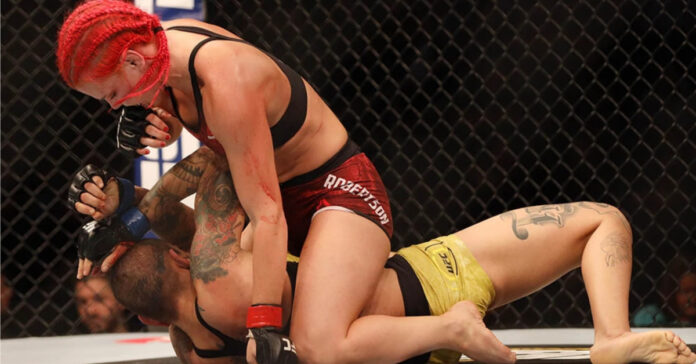 In a LowKickMMA exclusive, Gillian Robertson sat down with our very own Mike Owens to discuss her upcoming match-up against former training partner Mariya Agapova at UFC Fight Night: Sandhagen vs. Song.

Gillian Robertson who was last seen in the octagon back in March at UFC Fight Night: Santos vs. Ankalaev and will be looking to bounce back from her unanimous decision loss to J.J. Aldrich. ‘The Savage currently sits 1-3 in her last four fights, but this does not truly reflect her abilities, suffering defeats to Miranda Maverick and Talia Santos is nothing to be discouraged by especially given Santos would accumulate two more wins following this matchup to earn herself a shot at Valentina Shevchenko’s flyweight strap.

Looking to find herself back in the win column, Gillian Robertson feels confident ahead of her fight with former training partner Agapova and although credits the ability of ‘Demonslayer’ she is aware of what she needs to do to find herself successful come fight night.

“Agapova and I actually worked together for three or four months at ATT. She is a very awkward southpaw, and it is almost because she has such an awkward style it’s hard to deal with. So, her strikes and her kicks come out and weird angles, so it is sometimes unpredictable, but I think the obvious victory for me here is on the ground. I feel just like technically I win that battle.”

As she sees her path to victory taking place on the ground in her next upcoming matchup Robertson is extremely confident in her ju-jitsu and how her matchup will play out should the fight end up on the ground, and that is a statement that applies to any and all contenders within the flyweight division.

‘I feel like id at least threaten the takedown no matter what, there are some girls that maybe I would want to get tired before we are going to the ground so I would take them down then let them get back up a bit and work that, more of the wrestling portion and then we could go to ju-jitsu. No matter what the grounds definitely my world and I honestly just want to be able to display my strikes on the ground.’

Agapova has fallen short of expectations since joining the UFC with high expectations surrounding her before making her debut inside the promotion. However, Gillian Robertson is aware of what she can bring to their matchup but also as aware of where her opponents weaknesses lie.

‘I feel like she tends to come out strong and hard at least at the beginning of her fights, with Cifers, and with Dobson, she came out extremely fast. A little bit more patient in her more recent fights but in her first two fights where she did come out too fast, she kind of gassed herself. I feel like it’s shown in the fights how our styles will match up and how my ju-jitsu will match up against hers.’

Gillian Robertson who has to face a tough run of opponents inside the UFC will be looking to add another impressive name to her resume with the Canadian holding victories over the likes of Priscila Cachoeira and Molly McCann. At just 27-years old the future is bright for Robertson and a win here could begin to build back the momentum she needs to ascend back up the flyweight division.

You can find the full interview and much more content including event previews and reviews over on our YouTube channel at LowKickMMA.