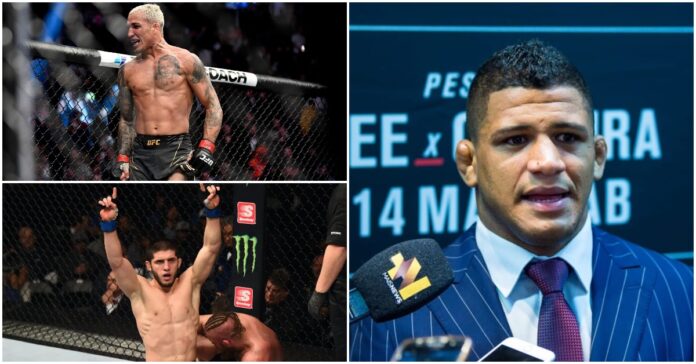 UFC Welterweight title challenger Gilbert Burns, believes that Charles Oliveira would beat Islam Makhachev due to his striking being better all around than Makhachev’s at this point.

Oliveira has gone head to head with some of the best strikers in the lightweight division. The lightweight division has some of the most elite strikers in the UFC and is one of the most dangerous divisions in the entire sport. Oliveira has had times in all his fights when he out struck Dustin Poirier, Michael Chandler, and Justin Gaethje in his recent title run and defenses.

Justin Gaethje is known for his striking ability, and Oliveira rocked him in the first 10 seconds of the fight and even knocked him down. Makhachev’s striking is no where close to any of the previous three fighters mentioned, but his ground game and wrestling is one on the best we have ever seen in UFC history.

“If I was the matchmaker, I would make Islam vs Oliveira for sure,” Burns said in an interview with Helen Yee. “That’s a fight that is very intriguing. I still believe Oliveira can get the win, because his striking. The pressure that he does and the jiu-jitsu. People say all the sambo and hey I got it, but Oliveira is huge for that division…. I think he’s on a different level.”

Burns is ready to see the fight between Oliveira, much like mostly everyone involved in the sport. The only thing that may be holding the UFC back from making the fight at the moment, is the fact that Makhachev has yet to beat a top five ranked fighter in the division. He has also only beaten one top 10 fighter, Dan Hooker on short notice.

Burns himself is coming off an amazing bout against Khamzat Chimaev, that could have easily went either way. Burns is one of the best strikers in his division and he pairs that with phenomenal jiu-jitsu, much like Oliveira does.