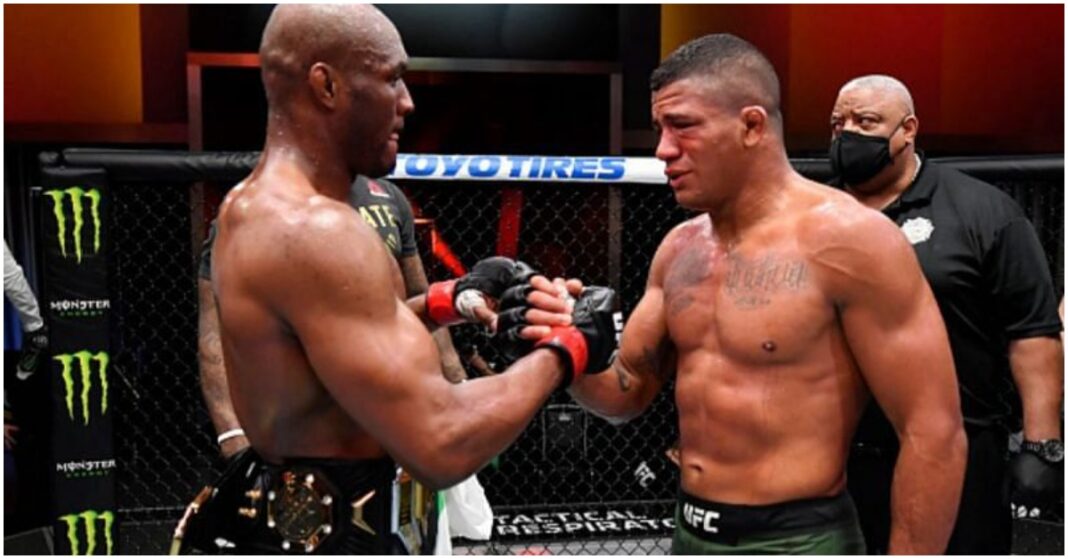 Gilbert Burns is of the opinion that Kamaru Usman is the best welterweight fighter of all time and would’ve beat Georges St-Pierre in his prime.

‘Durinho’ has looked brilliant since moving up to 170lbs in 2019, picking up five wins and beating the likes of Stephen Thompson, Tyron Woodley, and Demian Maia.

Burns deservedly got his shot at the welterweight strap earlier this year and started well against his former teammate, Usman, before ultimately falling to a third-round TKO defeat.

‘The Nigerian Nightmare’ has since gone on to make two more defences of his title, knocking out Jorge Masvidal before outpointing Colby Covington over 25 minutes for his fifth successive title defence.

Although he still trails GSP in terms of title defences, Burns believes that Usman has already done enough to be named the welterweight GOAT.

“The way he’s dominating is way more appealing than St-Pierre’s way,” Burns said on MMA Fighting’s Portuguese-language podcast Trocação Franca. “St-Pierre took people down and did ground and pound, it wasn’t such convincing victory sometimes, and Kamaru is winning way more convincingly. He’s already the best in my opinion, but I think he’s still missing more title defenses to end the conversation.”

“I tried to take him down and couldn’t, Colby tried to take him down and couldn’t, many others tried but it’s really hard to take him down,” Burns added. “I remember landing some hard shots on Kamaru, really hard ones, feeling my hand landing flush on his head, and he kept going. I remember one head kick I landed flush, I had a bump on my shin afterwards, and he kept going. I think his striking is superior to St-Pierre’s. Kamaru is on another level in wrestling, too. I think that both in their prime, I’d bet on Kamaru.”

Do you agree with Gilbert Burns? Is Kamaru Usman the welterweight GOAT?