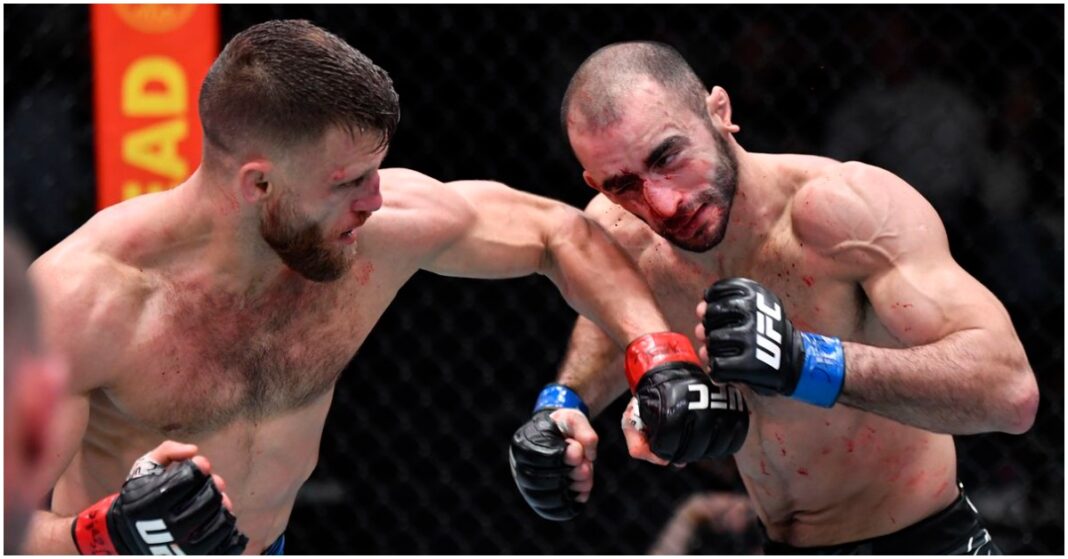 Giga Chikadze has issued a warning to the featherweight division after his lopsided loss to Calvin Kattar at UFC Vegas 46.

Chikadze (14-3 MMA) faced off in the headliner of the UFC event in Las Vegas, as he faced division rival, Kattar (23-5 MMA) in a full 25-minute slugfest, as both fighters landed a combined 272 significant strikes on each other.

The Georgian entered the bout with a nine-fight win streak, with his most recent victory coming against veteran Edson Barboza back in August 2021.

Whereas his opponent, ‘The Boston Finisher’ was coming back after a lengthy 12-month break following his historic beatdown from former featherweight champ Max ‘Blessed’ Holloway.

The inaugural UFC main event of the year exceeded its expectations after the back-and-forth encounter shaped an early candidate for ‘Fight of the Year’.

However, Chikadze still feels confident in his ability to reach UFC featherweight gold, as he expressed his feelings on a Facebook live after the fight:

“I f**ked up last night but it’s all good, it’s a journey and I’m learning from this,” Chikadze said. “Next time gonna come back so much stronger. I already feel bad for my future opponents. Trust me on that. And also, I feel like if I was to fight this guy 10 times, 9 times I would win.”

Whats next for Giga Chikaze following his recent loss?

While his loss was evidently convincing, it isn’t the end of the day or even a huge step misstep for the ‘Ninja’. The bout won Fight of the Night and had other fighters and fans across social media praising both the men for their effort.

Chikadze called out “cheap f**k”, Chang Sung Jung who reveled in his defeat at UFC Vegas 46. ‘The Korean Zombie’ is scheduled to face featherweight champion Alexander Volkanovski in April. The 145lb is shaping up nicely in 2022 and Chikadze will surely be a player in the division when he returns to full fitness.

Who do you think Giga Chikadze should face next?