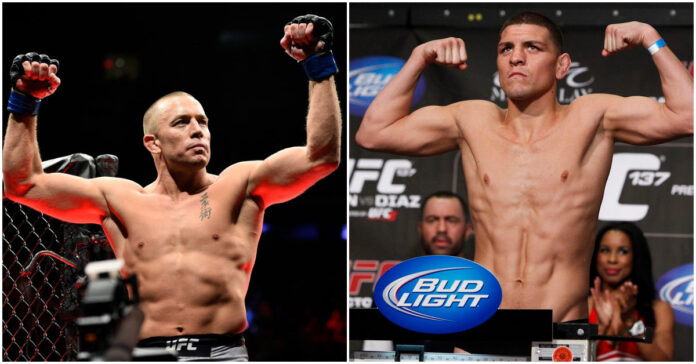 UFC Hall of Famer Georges St-Pierre shared his recent backstage encounter with Nick Diaz at his return to the cage at UFC 266.

Last September, Nick Diaz made his long-awaited comeback to fighting when he took on Robbie Lawler at UFC 266. While Diaz looked phenomenal in his return to the cage for as long as it went on, he didn’t seem to find his form in the cage and didn’t look like himself in the later rounds.

An old foe the Stockton-native ran into just before the fight was none other than former UFC two-division champion Georges St-Pierre. He was at the event cornering his teammate Nasrat Haqparast, who was fighting on the same card. GSP and Diaz shared a heated rivalry during their time in the promotion with Diaz firing multiple shots at the Canadian fighter and the organization.

In a recent appearance on The MMA Hour, Georges St-Pierre explained how he was unsure of the reaction he would get from Nick Diaz. During their trash talk in the lead-up to the fight, GSP expressed his confusion on whether Diaz actually took issue with him or not.

Georges St-Pierre and Nick Diaz’s history in the promotion

“When it happened, he was walking towards me — and with Nick Diaz, you never know,” St-Pierre said. “So I was like, I took a stance in a way, like I didn’t know if he wanted to come to fight me or he wanted to talk to me. [Laughs].

“But when I saw him physically reach out to me with his hand I went, ‘Oh, OK,’ and I reached out and I shook his hand [and thought], ‘So it’s peace, I guess.’”

Speaking on their public feud during some of the most heated press conferences, GSP said, “Nick is one of the guys that took fighting very personal. Whatever that I said, I never wanted to hurt him on a personal level. I just said things to make the fight more interesting.

“I never had any animosity with him or any of the guys once I retired. For me, it’s only business.”

Is Georges St-Pierre the GOAT in MMA?