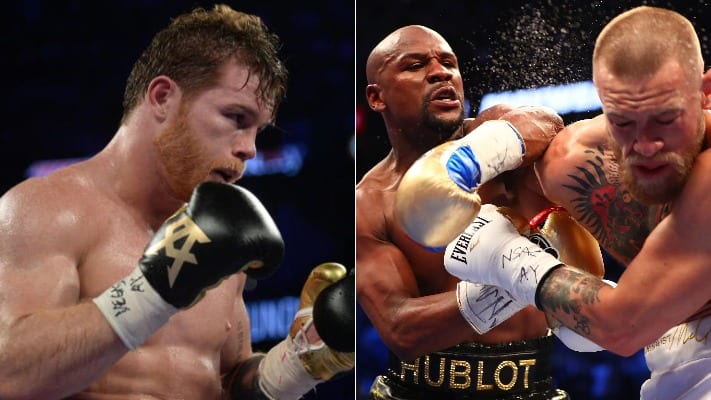 Floyd Mayweather Jr. has shared the ring with some of the greatest boxers of all time.

Of course, the argument can be made that Mayweather himself is the greatest to ever lace up a pair of gloves. “Money” has racked up an undefeated record of 50-0 inside the squared circle. His milestone 50th consecutive victory came last year against UFC mega-star Conor McGregor.

The entire ordeal was a glorified circus act, in which Mayweather dragged the Irishman into the later rounds, allowing the then-UFC champion to exhaust himself en-route to a 10th round TKO win. Recently, Mayweather has come out and heaped a ton of praise McGregor’s way, all while taking a shot at unified middleweight boxing champion Canelo Alvarez.

In the wake of Alvarez signing a huge new broadcast deal with the DAZN streaming network, Mayweather posted the following on Instagram:

“It didn’t matter if Canelo ate his PED steak or not this night, this was by far the easiest fight of my career! Connor McQuitter was a way better fighter than Canelo’s cheating ass and I beat the brakes off him too!

“It takes me 36 mins or less to make $300 million plus. It literally takes me 1 night and 1 fight to make what you might make in 5 years and 11 fights! So really, who’s still winning? You do the math!”

Canelo recently signed the biggest contract in sports history. A five-year, 11-fight, $365 million broadcast deal with DAZN. In Mayweather’s absence, Canelo has arguably become boxing’s biggest star in the United States. Perhaps Mayweather’s fighting words, who is rumored to return to the ring later this year, are setting up a rematch with the Mexican slugger.