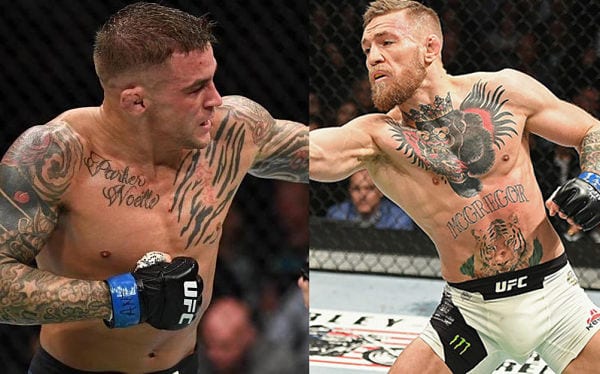 Firas Zahabi is giving the slight edge to Conor McGregor over Dustin Poirier.

McGregor faces Poirier in a lightweight rematch that will headline the UFC 257 pay-per-view event on January 23 in Yas Island, Abu Dhabi.

It’s a rematch of their 2014 featherweight meeting that saw the Irishman comfortably knock Poirier out in the first round. And while both fighters have improved massively since — especially Poirier — Zahabi believes the styles of both fighters play into the hands of McGregor.

“I’m not saying Dustin has no chance to win,” Zahabi said on his podcast. “I’m giving it 60-40 in McGregor’s favor. I don’t usually go 60-40 especially at this level. Two elite guys who were world champions. They both have ways to win, they’re both super seasoned, super experienced, super dangerous, they’re both finishers.

“Why am I being so generous? Well, I think this has a lot to do with styles. Conor McGregor is the best counter-puncher in UFC history. There’s never been a counter-puncher like him in MMA. Dustin Poirier‘s number one weapon is boxing so he’s kind of feeding the McGregor machine — exactly what McGregor wants. But because he’s primarily a puncher, and he’s a very good puncher, he’s just not a puncher at the level of a McGregor.

“McGregor has reached, in my opinion, the highest level of MMA so far.”

Zahabi would add that Poirier definitely has the heart over McGregor and is capable of taking him down or taking the fight to the latter rounds.

That said, he just doesn’t see it happening.

“I don’t think it will go that far,” Zahabi added. “I think McGregor is going to get his job done in the first two rounds.”

Do you agree with Zahabi?